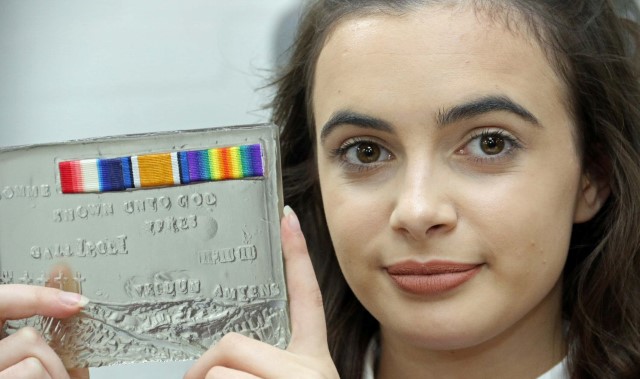 STUDENTS have joined special forces and veterans of conflicts around the globe in a remembrance project driven by the mother of an army captain who died serving his country.

Sixteen students at St John’s School and Sixth Form College A Catholic Academy, Bishop Auckland, are putting the finishing touches to a powerful exhibition that will become centrepiece of a Festival of Remembrance at Durham Cathedral.

Members of the elite Special Boat Service have also been involved in the glass postcard initiative as a tribute to their fallen colleague, Jaquie’s son Richard, who died during an operation against Taliban insurgents in 2013.

The project was inspired by St John’s Catholic Academy science teacher Philippa Clarke when she bought a collection of old postcards and showed them to Jaquie.

Hand-painted by Juliet Nora Williams, they were written and sent to Tynemouth-born Royal Field Artillery officer Kenneth Garnett, who was shot in the neck in August 1916 at the battle of the Somme and sent to the Empire Hospital, Chelsea.

The 25-year-old officer spent a year on his back in a hospital bed before dying almost 12 months later to the day.

“I was completely hooked by the story and thought it would make a great and thought-provoking project,” said Jaquie. “I wanted the project to have depth and range, which is what we have done.”

History teacher Clare Howard and English teacher Anna Oulton guided students through their research with help from from RE teacher Jo Holdsworth and background from Alan Fidler, project co-ordinator of Northumbria World War One Commemoration Project.

Sixteen Year 9/10 students were chosen to take part visiting veterans from Phoenix House Recovery Centre, many of the servicemen living with physical injuries, all with post-traumatic stress disorder.

Now in Years 10 and 11, they have also visited the Durham Light Infantry archives at Spennymoor, examined attitudes to war and have designed their own glass postcards with architectural glass artist Sue Woolhouse.

These will be mounted on three large steel crosses fabricated by DT technician Ian Maddison and Barry Czerniawski, 15, a Year 11 Level 3 creative crafts student, to form an integral part of an exhibition at the Festival of Remembrance in Durham Cathedral on November 11 and 12.

“They looked at the text of the original postcards and produced their own in glass to tell the story but also capture a personal meaning,” said Jaquie.

“The messages don’t have to be clear to anyone else who may look at the postcards, which I thought would be interesting, and some are obviously deeply personal.

“I have also spoken to the welfare officer who has helped us since Richard was killed and some of his old squadron who have produced their own glass postcards and I have done one as well.”

She said she was really excited to have been contacted by members of Kenneth Garnett’s family including his great nephew and great great niece, who is studying at Durham University.

Pictures of the original postcards will be part of the exhibition too along with poignant quotations and some war-time letters. Students will join in the festival programme reading exerts from diary entries of those who fought in the war.

A soundscape created by students around the Fighting Bradfords will form the background to another reading detailing a battlefield gas attack The school has also been invited to take part in a celebration event at Phoenix House on November 22.

Student Sophia Dunn, 15, said: “It has been an amazing project, getting to know the veterans and hearing about their experiences. It has been very emotional, particularly for those students whose families have links with the forces.”