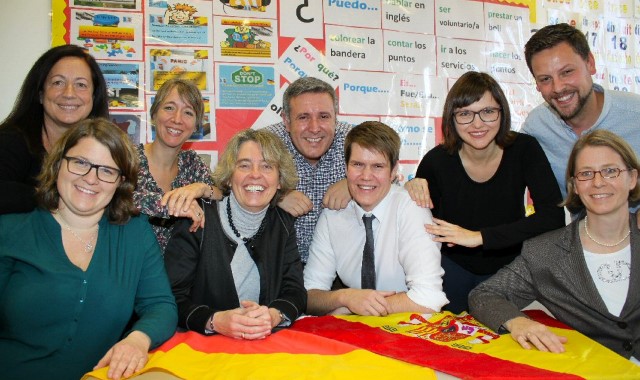 A TOP team of educators has travelled from Europe to the North East for a cultural exchange of learning, education and friendship.

“Having our European counterparts here really changes the dynamics in school for the week, especially in the face of Brexit. Our students can see that we are all the same, whatever our culture, with the same values and the same love of languages.

“Seeing such good relationships between people from different countries really encourages our students to learn and the visiting staff the chance to explore our different approach to teaching.”

Alongside the European delegates visit to Bishop Auckland, staff from St John’s School and Sixth Form College are also expanding their partnership job-shadowing six teachers in Hungary.  In addition, two staff members are attending a well-being course in Spain in December and two senior leaders are heading to Finland in April to look at their education systems.

English teacher Ms Villarino, of Hijas de Christo Rey School, A Courna, Spain, said: “Being here is a priceless experience. Things are very different to the way we teach in Spain, different timetables, different classrooms, different ways of teaching. I think I prefer the English way of teaching but we all have things that we can learn from each other.”

English and Latin teacher at Carlo Schmid Gymnasium, Tubingen, Germany, Judit Loffler said: “The way that languages are taught in England is very different to the way that we teach in Germany.”

During their visit the group also spent time visiting North East landmarks and enjoying an evening at the Durham Lumiere Festival.