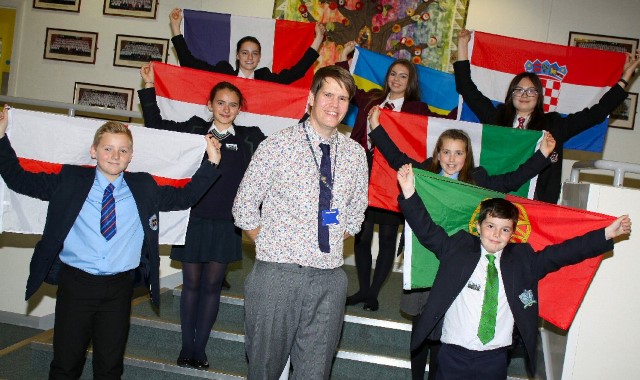 GIFTED linguists flew the flag for modern languages with a day of conversation cuisine and culture.

Staff and students from St John’s School and Sixth Form College, Bishop Auckland, welcomed dozens of pupils from eight Catholic Partnership schools across the region to their annual European Day of Languages.

The 90 Year 8 language pupils were met with a welcoming hot chocolate and croissant before being separated into mixed school groups for workshops in French Food, languages through football, French music, Portuguese and Russian.

Head of modern foreign languages at St John’s School and Sixth Form College Phil Robertson said: “It is wonderful to be able to bring so many of our Catholic Partnership schools together to celebrate languages, especially when issues such as Brexit are at the forefront of everyone’s minds.

“The day is also about the students having a lot of fun and getting to meet new people from all corners of the region to celebrate languages as one and make new friendships along the way.”

The European Language Day is one of a host of initiatives that has seen St John’s School and Sixth Form College become a British Council accredited International School.

Alongside its annual Year 7 student exchange to Zaragoza in Spain, the school has established links with Iquitos in Peru, where sixth form students have travelled for the past five years to impoverished areas of the Amazon, help build schools and bakeries, while Year 9 and 10 students have visited Senlis, France, to pay their respects at the war graves and cemeteries of the WW1 Somme battlefields.

Teaching staff are also benefitting from the initiative after the school secured 40,000 Euros of EU funding for job shadowing and staff development opportunities through the Erasmus project in A Corina, in North West Spain, Turbingen, in Germany, Finland and Malaga, with a further 50,000 Euros secured for Year 9, 10 and 11 students to undertake work experience in international commerce within a number of top Spanish based businesses including clothing giant Zara.

The school also subscribes to teachers of all subjects being given the opportunity to up skill their language development, through the government funded Teacher Subject Specialism Training, to encourage more staff to teach a language based subject in order to meet the council’s aim of ensuring 75 per cent of all students in County Durham study a modern foreign language by 2020.

“Therefore it is vitally important that we continue to push forward as many opportunities as possible for them to study a variety of languages within school, to enable them to go beyond Bishop Auckland, South West Durham and the North East into the wider world, with the necessary skills to communicate.”

Mario, 16, of Spennymoor, whose father is Italian and who lived in Italy for ten years before coming to the UK, said: “I’ve always spoken both English and Italian so it was only natural for me to study Italian at GCSE and A level.

“I think having another language opens so many doors for you all over the world.”

Bethany Ruiz Watson, of Bishop Auckland, said: “My dad is Spanish and I was born in Spain so we always spoke Spanish outside and English in the house.

“I’m studying both Spanish and French at A level with thoughts of perhaps working in the field of business translation when I leave university.”

Ivan Watson, 16, who is also studying A level French and Spanish added: “My mum is half Spanish and half French so I have been speaking both languages as well as English all my life.

“I also play basketball for Durham so would love to find a career where I could combine my love of sport and language skills together.”