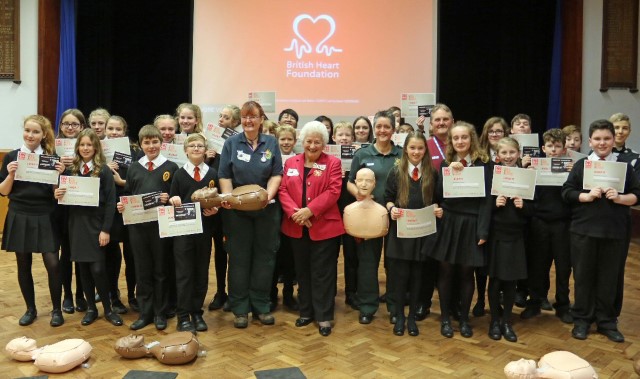 A BARONESS paid paramedics and students a heart-felt thanks for their life-saving work which she believes should be rolled out across the country.

Year 8 students from Richmond School and Sixth Form College were among 30,000 Yorkshire-wide learning CPR skills which have resulted in the best heart attack survival rates in the country.

Nationally only 10 per cent of patients survive if they suffer a cardiac arrest outside of hospital.

But in Yorkshire the rates are an incredible 43 per cent thanks largely to a Yorkshire Ambulance Service initiative with schools.

The Restart a Heart Day initiative began in North Yorkshire about four years ago instructing children in the best course of action should they come across someone who has collapsed. It is now co-ordinated by YAS clinical development manager Jason Carlyon, who is based in Scarborough.

The member of the House of Lords was so impressed that she plans to talk with colleagues in Parliament about the possibility of CPR being part of the national curriculum.

She said: “The survival rates in this county are absolutely magnificent and I strongly believe this is because of days like these. I will be raising this with my colleagues because this is something that should be introduced across the country.”

Vanessa told students: “Two years ago a boy collapsed on the fields of a school in York and his friends were able to give him CPR because they had been delivered this training – he survived.”

Learning for life co-ordinator at Richmond School and Sixth Form College Nicola Walker said: “Our students took the training very seriously and I am confident would respond in the right way in the future if they came across anyone taken seriously ill.

“They will have the knowledge to call for help and the skills to potentially keep someone alive in the critical moments until medical assistance arrives. It’s a fantastic initiative and the survival rates are clear proof that it is a genuine life-saver.”