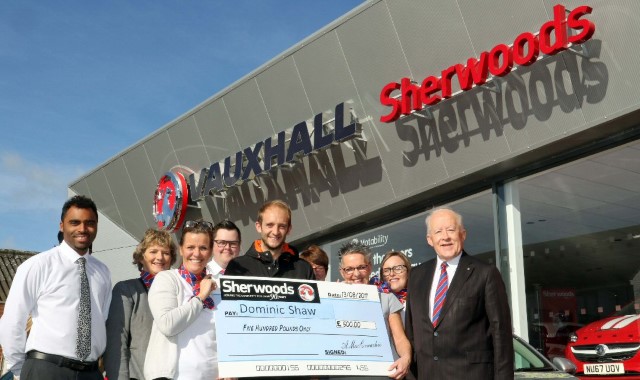 A RECORD breaking runner found himself jogging to the bank to cash a cheque for hundreds of pounds after setting a new course best on his first attempt.

Dominic Shaw won the annual Sherwoods 10K in August in a time of 30.02 shaving hundredths of seconds off the previous best time set in 2014.

Race sponsors Sherwoods, which operates Vauxhall dealerships in Darlington, Stockton and Northallerton, presented the 28-year-old with £500 to mark the popular race’s 30th anniversary.

Darlington Borough Council, Rotary Club Darlington and Sherwoods have staged the event on the borough’s roads for three decades, raising thousands of pounds for local charities and individual causes. This year it attracted 2,200 competitors.

Dominic, of Ormsby, is a member of New Marske Harriers and has enjoyed running for the past 13 years as a means of keeping fit so he can play football successfully.

“My brother recommended the race and this was my first attempt,” he said. “It was a strong field but I’d run 29.48 on the track so knew I could be in the mix. I didn’t think about winning and just wanted to keep in touch. When we got to around 8-9km I realised I was in with a chance.”

Darlington Borough Council race director Phil Haymer said: “I realised how close he was to not just breaking the record but the 30 minute barrier, and I was willing him on as he appeared to be easing back.”

Chairman of Sherwoods Alasdair MacConachie said: “The race really is one of the high points of the year, an incredible event which does so much good in the community. It was only fitting that the race record should be broken in a landmark year and we congratulate Dominic on his superb performance.”