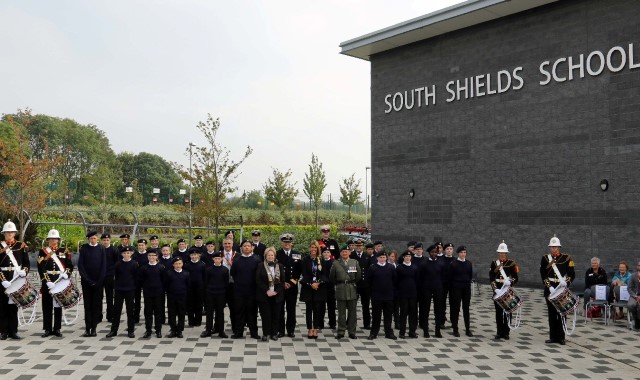 STUDENTS proved to be all ship-shape as Royal Navy top brass launched a life-changing project at their school amid a cacophony of marine corps drums.

One of the Royal Navy’s most senior officers gave the newly formed Royal Navy Cadet Force section the official seal of approval at South Shields School, the third to be formed in the country as part of a £50m nationwide expansion scheme.

Navy Regional Commander North East Commodore Philip Waterhouse took time out of his busy schedule in Portsmouth to attend the grand opening ceremony, which was hosted by the school’s headteacher Allie Denholm.

He is responsible for running all things Naval, outside of the bases and dockyards, in the North East and North of the country.

CDRE Waterhouse said: “You are strengthening the ranks of the CCF and as such formally become part of the Royal Navy. Today is a day for pride and you should be proud of what you have already achieved.”

Ms Denholm added: “I am so proud of the students. This is something we have talked about for a long time and now it has happened it is amazing. We are very excited to launch the initiative because of the opportunities it will provide in gaining leadership skills and expanding horizons.”

CDRE Waterhouse witnessed the raising of the flag, the Pipe the Still and the Carry On, before inspecting the cadets, taking the salute and making a formal address to assembled VIPs, parents and staff.

The Cadet Expansion Programme aims to promote military ethos in another 500 schools, to instill values in young people that will help them get the most out of their lives, and contribute to their communities across the country.

Scuba diving, kayaking and residentials from Portsmouth to Scotland are just some of the activities Royal Navy Cadets at South Shields School have been able to explore so far.

As word spread throughout the school, a compliment of 31 students enlisted to join the cadets.

Royal Navy Cadet Officer Sergeant Andy Holmes, an ex-Royal Marine Commando, works with the cadets when they meet every Wednesday after school.

He said he was delighted with the way the Royal Navy Cadet scheme had taken off and thrilled so many students appreciated its benefits.

“I see a massive change in the students,” he said. “It brings out their self-confidence and leadership skills, promotes bonding and team-building and helps them develop a host of new skills.”

Four students have also been trained as leading hands following the Royal Navy syllabus to earn their One Star ranks.

For leading hand Jordan Kwok, 15, his naval involvement continues a family tradition stretching back generations. He said: “My great grandfather was a high ranking naval officer in charge of a base in China. I’m finding being in the cadets very interesting and useful in giving me the skills I will need in the future.”

Leading hand Elle Crompton, 15, whose granddad is a tanker captain, added: “The ceremony was spectacular and it is amazing that our school is involved in something so great. It has really boosted my self-confidence.”