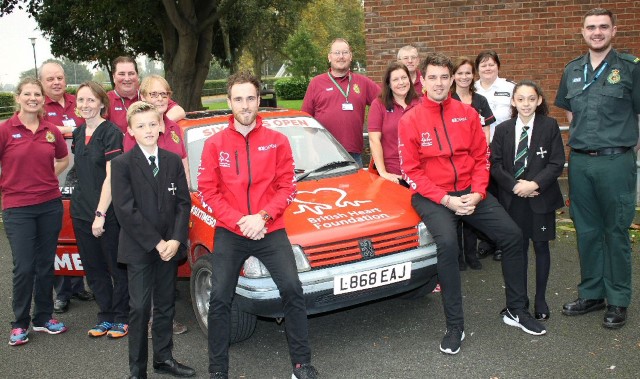 A TWIN who is set to undergo his sixth open heart operation has been helping raise awareness of lifesaving skills at his former school.

Jonathan Stretton-Downes, who was born with the life threatening heart condition aortic stenosis, returned with his brother David to Northallerton School and Sixth Form College to watch pupils learn cardiopulmonary resuscitation skills as part of the British Heart Foundation’s Restart a Heart campaign.

Over 200 Year 7 students took part in the annual event run by the Yorkshire Ambulance Service and backed by the Resuscitation Council, British Red Cross and the British Heart Foundation, which equips youngsters with the necessary skills to perform the life saving procedure.

Jonathan, 29, who underwent his first operation at just six weeks old, said: “Aortic stenos is a narrowing of the aortic valve in the heart which affects the body’s ability to pump blood.

“I had my second operation when I was nine, to replace one of the aortic valves, and then a further three operations within the space of just one month when I was 15.

“My next operation, my sixth in total, will hopefully take place before Christmas and that is what prompted my brother David and I to start a campaign to raise awareness and funding for research into heart disease.”

Their national campaign Six Times Open aims to raise over £100,000 for the British Heart Foundation through a series of events including a 60-minute documentary of Jonathan’s latest open heart surgery and his road to recovery.

“It’s all about sharing my story and showing that heart disease can affect people at any age but that it also doesn’t have to stop you living your life,” added Jonathan.

“It’s great to return to our old school and see so many students learning essential skills that could one day save someone’s life.

“Children really are the lifesavers of the future and it’s really important that we invest these skills in the next generation.”

Yorkshire Ambulance Service paramedic Jack Cornforth, 21, also a former student at Northallerton School and Sixth Form College, said: “This is the first time that I’ve been back to my old school since I qualified as a paramedic and it’s great to see the students so enthusiastic to learn CPR skills.

“Nationally one in ten people survive after receiving CPR, in North Yorkshire that figure is four in ten which is testament to the success of projects like this.”

Northallerton School and Sixth Form College assistant principal Mel Websdale added: “This is the third year that we have taken part in the Restart a Heart campaign.

“It is a superb opportunity for students to learn lifesaving skills that really do make a difference.”