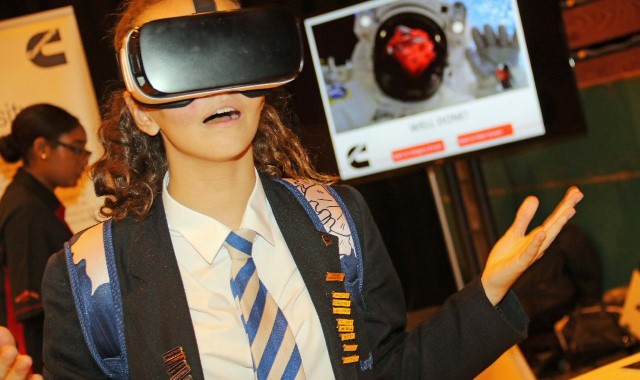 THREE hundred school and sixth form pupils were given a first-hand insight into working in engineering and technology industries and available apprenticeships at two events supported by leading North-East companies.

The national award winning Foundation for Jobs, which aims to inspire young people’s interest in the industry sectors which are set to create the most jobs in Darlington and the Tees Valley over the coming years by linking education with industry, ran the STEM apprenticeship event and Ingenious STEM events in Darlington on Tuesday (19th) and Friday (22nd) last week.

At the apprenticeship event 143 Year 11 and Year 13 pupils from Darlington’s secondary schools and sixth form colleges were able to meet representatives of companies which run apprenticeship schemes and would be looking to recruit young people to start work from next summer in a range of disciplines related to engineering or STEM (Science, Technology, Engineering, Maths).

At the Ingenious STEM event 157 predominantly year nine pupils worked on practical STEM activities with staff from 10 companies and organisations with the aim of challenging their perceptions of working in related industry sectors.

Foundation for Jobs chairman Coun Chris McEwan said: “I would like to say a huge thankyou to the companies and organisations who willingly gave their staff’s time to support these two important events.

“Because companies’ apprenticeship schemes open for applications across the academic year it is vital that our young people know how and when to apply so they are not missing out on the opportunity for a fantastic career with one of these leading firms.

“For the slightly younger age group at the ingenious STEM event it is important we challenge their perception of careers in engineering, digital and science related industries, as these are areas vital to our economy but facing skills gaps because not enough young people are pursuing these careers.

“This is often because of a preconceived notion of what is involved and these events help to demonstrate that in fact a lot of the skills these young people enjoy using are vital to work in these industries.”

Funded by The Careers and Enterprise Company Foundation for Jobs is led by Darlington Borough Council and supported by the Darlington Partnership of private firms and public sector organisations, including The Northern Echo. It has worked with around 8,000 young people since it was launched in January 2012.

For details on Foundation for Jobs contact programme co-ordinator Owen McAteer at owen.mcateer@darlington.gov.uk or visit www.foundationforjobs.co.uk