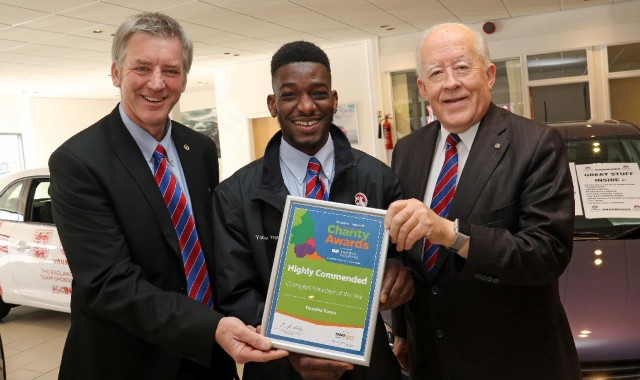 A REFUGEE who fled to Britain after the assassination of his parents has won high praise for his efforts to pay back the community which gave him sanctuary.

Yacouba Traore arrived alone in the UK when he was just 16 unable to speak English after his political activist parents were murdered in their home nation of the French-speaking Ivory Coast.

Sent to the North-East by the Government, he has lived with his foster parents ever since. He is currently on a year-long IT support placement with Vauxhall dealers Sherwoods, which operate dealerships in Stockton, Darlington and Northallerton.

But his work helping others captured the attention of judges of the 2017 North East Charity Awards who presented him with a highly commended accolade in the Champion Volunteer of the Year category.

The 23-year-old, of Billingham, was applauded for his work with food banks, helping people in care homes develop IT skills, such as sending emails and Skyping and the time he gives to other asylum seekers.

“A lot of people have helped me so I want to give something back to the community,” he said.

“I was really pleased to be short-listed as a finalist and delighted to be highly commended. I felt so proud to be recognised. I want to keep helping others and developing my own skills, to learn as much as I can. I am so grateful to everyone who has supported me, my foster parents and local organisations.”

Chairman of Sherwoods Alasdair MacConachie said: “It is impossible for us to comprehend the trauma Yacouba must have endured in his young life and I am so thrilled that he has grabbed the opportunity to make a home in the North-East.

“Even after everything he has been through he seems more concerned for the welfare of others than himself and he thoroughly deserves this recognition for his volunteering. It is a privilege to be able to offer him a placement with us and he is proving to be an invaluable member of the team.”