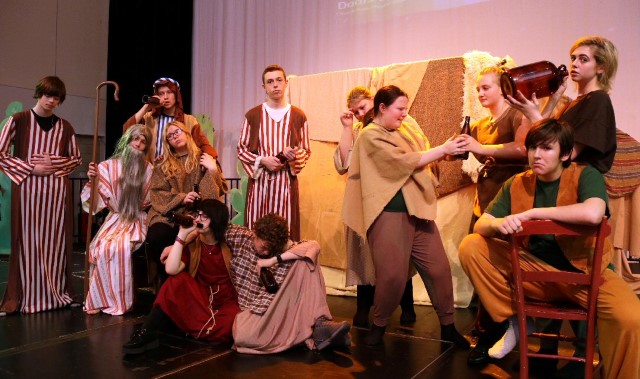 STUDENTS put on an amazing technicolour performance when they staged a musical family favourite.

A cast of 40 students from Years 7-13, including musicians and backstage crew, took part in Joseph at Trinity Academy, in Thorne.

The three-night run of the classic show by Sir Andrew Lloyd Webber and Tim Rice followed the story of Jacob’s favourite son, Joseph, who is blessed with vivid dreams foretelling the future. Sold into slavery by his jealous brothers, Joseph endures a series of challenging adventures, eventually ending up in prison.

However, news of his ability to interpret dreams sparks interest from the Pharaoh and Joseph is freed. He later reveals himself to the grovelling brothers who betrayed him, forgives them and they are reconciled.

Rehearsals began only six weeks before curtain-up for principal cast members Oliver Page as Joseph, Phillip Gwynn as Jacob, Hannah Sanderson and Lucy Evison as Potiphar and his wife, Sonny Gutteridge as the Pharaoh and Evie Pearce and Leo Cousins as the baker and butler.

Producer, director and head of performing arts at the academy Mel Cutler said: “The students really got into their roles and did a fabulous job. They were very dedicated throughout rehearsals and those students performing in a Trinity production for the first time really loved the process.”

In a team effort, dance students also performed with choreography devised by Gemma McArthur, Lorna Hadwin was stage manager, the art department, led by Laura Howlett, brought Gloria the camel to life and Ann Littlefield and the performing arts department created the costumes.

In true dramatic style, maths teacher Alastair Bush had to step in to lead the music just two weeks before the show when the original musical director took ill.

Mrs Cutler said: “He has been amazing, as has Tim Watkins who was single handedly responsible for stage lighting and sound. It’s been a fabulous team effort.”