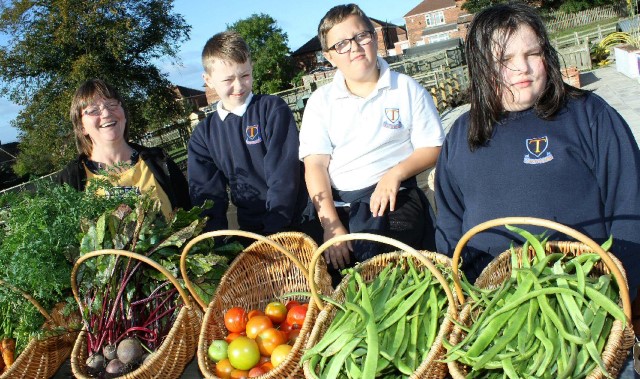 CHARITABLE students have donated a harvest of fresh school-grown produce in dramatic fashion to help support their local food bank.

She was in school to help students understand the work of foodbanks and form a strong link with the academy.

Students were engrossed as Jackie took them through the history of the foodbank, which is based at Meadowell, North Shields, and provides weekly food parcels to those most in need, explaining the ideology behind it.

“When we started in 2012 we were helping about six people a week,” said Jackie. “Now we are supporting over 100 and have given out more than 16,000 food parcels.

“I know mothers who don’t eat so that they can feed their children. We get referrals from social services, from schools who say pupils come in hungry on a morning and we make parcels up for homeless people who have to eat cold food from a tin.”

Students showed Jackie around their farm and presented her with baskets of hand-picked home-grown fruit and vegetables to help people living in the community struggling to buy food for themselves and their families.

The magnificent haul, including fresh carrots, onions, radishes, tomatoes, beetroot and green beans, was loaded into Jackie’s car by students.

She said: “I have been absolutely overwhelmed by the generosity of students here at Trinity Academy and their magnificent freshly grown produce will be gratefully received.”

Student Brendan, 12, added: “It’s good to know that we have watched the food grow from seeds and it will now go to the food bank.”

Acting assistant head Sharron Hodgson said: “We asked Jackie to come into school, as part of our kindness agenda, which is one of the fundamental values we are looking to promote within school.

“We want our students to understand the process of giving and sharing on the back of the amazing work they do on the farm and as part of the PREPARE curriculum. It is wonderful to know their hard work will help so many people in our community.”

Students at the academy, which specialises in helping young people with social, emotional and mental health issues, also learnt how they could help support the food bank in the future by contributing to food donation bins in Sainsbury’s, Asda and Morrisons in Whitley Bay or the one now installed at the academy’s Oakfield site.

Trinity Academy Newcastle is looking to make regular donations to the foodbank and ism looking forward to sharing its own honey next year and provide fresh eggs from its chickens.