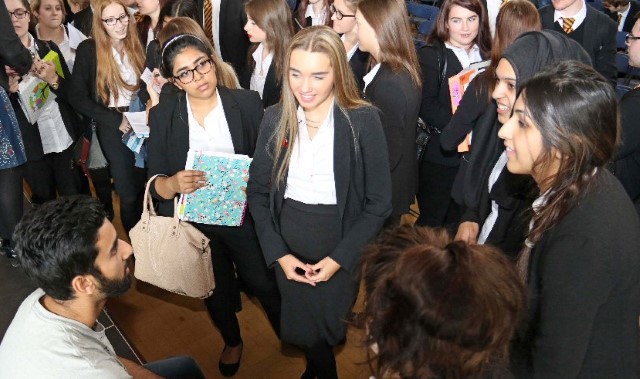 SIXTH formers have been challenging stereotypes and dispelling the myths around Islam in a hard-hitting workshop designed to broaden their minds.

In the first of a series of presentations and discussions at The King’s Academy, Coulby Newham, called Above and Beyond, Year 12 and 13 students were able to question community activists Zakir Mahmoud and Imran Naeem on a host of issues.

They gained a fascinating insight into the life of Teesside Muslims in a post-911 era of international terrorism, suspicion and racism.

Questions ranged from the impact on Muslims since the growth of Islamic State, including hate attacks, Islamic traditions, the Qur'an, Mohammed, Sharia Law and the refugee crisis.

Members of the Islamic Diversity Centre, Zakir and Imran examined how the media tackles Islamic issues, terrorism and extremism, myths and misconceptions around pronouncements in the Qur'an and the need to become an active part of the worldwide community.

“It does now feel a bit like the 1980s when we were chased through the streets by skinheads,” said Imran. “We are getting more cases of Muslim women being attacked, abuse on the streets and racist graffiti and egg-throwing.”

Zakir added: “There has always been a bogie-man; the Jews have been through it, so have the Irish. At the moment it is the Muslims' turn but we will come though it.”

He said all the good work – such as blood donations, elderly care projects and homeless campaigns – went unreported and was destroyed as soon as there was a terrorist attack.

“Jihad means struggle and there is no such thing as a holy war,” he said. “Islam is not spread by the sword but by doing business, good etiquette and honesty.”

He said abut 80 per cent of the world’s population lived in poverty and he had just returned from witnessing appalling conditions in refugee camps in Calais, in one of the richest countries in the world. “We are all human beings and we should be thinking about what we can do to help others,” he said.

Politics teacher Jenni Yuill said: “It is so important to recognise that there are huge issues today around Islamophobia and racism. This has been a fantastic opportunity for students to expand and open their minds. The insightful nature of their questions showed how much thought they had put into the session.”

Safia Hussain, 17, said: “It was very informative and I think it will help non-Muslim people at school to understand more.”

Samen Masud, 16, added: “I feel we are judged and it makes me angry, so people who judge us will know better now.”

Jordan Todd, 16, said: “I think how Muslim issues are portrayed are shocking as you only hear one side. We are all just people.”

Elissa Harris, 16, added: “I have lots of Muslim friends and it doesn’t matter to me what religion we all are. It’s wrong how the media reports it as not all Muslim are extremists, it’s only a tiny minority.”

Lewis Melvin, 17, said: “This is one of the best talks I have ever been to as it really opened my mind and dispelled a lot of myths.”