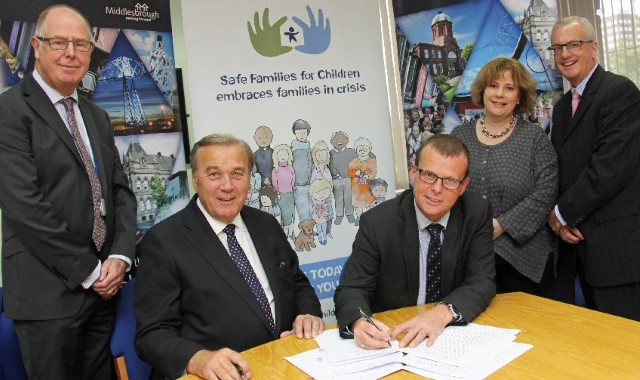 FAMILIES in Middlesbrough who are facing difficulties have been handed a lifeline after the borough council confirmed its commitment to a pioneering initiative that is helping keep children out of care.

Safe Families for Children (SFFC), a charity established by Sir Peter Vardy, has been working with children’s services in the town for two years.

In that time it has attracted an army of volunteers who step in to help families that are struggling to cope, offering a safe haven for children while parents tackle a host of challenges.

So far 326 families and 752 children have been helped in the North East pilot.

Middlesbrough took a leading role in the pilot, estimating that investment in SFFC could save taxpayers £1.4m in just one year by keeping children out of the care system.

The council has now followed Gateshead and Darlington in the North East in committing for the next three years by signing a Public Social Partnership with SFFC.

Sir Peter, who has invested £2m from the Vardy Foundation in the programme, said: “A well-functioning society starts with the family, but often parents find themselves overwhelmed. We know what the challenges are and we know there are people out there who want to help, but don’t know how.

“Safe Families brings the two together. It is a first port of call, providing early intervention and simple acts of kindness that make all the difference in stopping problems escalating.

“Middlesbrough Council, and the former Mayor Ray Mallon, supported us from the outset, appreciating very early on the benefits to families, their own social work teams and taxpayers. In fact, St Barnabas Church was the first to offer volunteers to help troubled families, so we’re delighted to have formalised our agreement with Middlesbrough for the next three years.

“Clearly there is an awful lot of public money to be saved here, but the value to families and society at large is much greater. No one wants to see young children going into care if it can be avoided.”

A Middlesbrough Council spokesman said: “The protection and well-being of children is of paramount importance, and we do all we can to ensure our young people get the best possible start in life.

“The ability to make early interventions and tackle issues before they escalate can help families stay together and prevent long-term problems taking hold.

“Partnerships like this make a real difference and have the potential to benefit all involved for the rest of their lives.”

It attracted interest from Secretary of State for Work and Pensions Iain Duncan Smith, who approved £2m from the Department for Education’s Children’s Social Care Innovation Fund to allow SFFC to expand its service and Public Social Partnerships.

It means local authorities in the North East, as well as Greater Manchester, Merseyside, West Midlands and East Midlands, will receive the service for free in the first year.

Safe Families believes it can reduce by five per cent, or £8m, the overall annual care costs of £160m across the North East and has appointed the respected Dartington Social Research Unit to monitor, measure and evaluate the programme’s success.

Michael Little, co-director of Dartington, said SFFC was identified as an initiative of great potential.

He explained: “Of all the things we get involved in, this one shows the greatest promise. A lot of programmes oversell themselves. What I particularly like about Safe Families is it’s a simple proposition.

“We are cautious in our estimates, but even then the evidence is extremely promising. The programme has the potential to produce a very good rate of return to local authorities.”

How Safe Families for Children works

Safe Families targets vulnerable families, typically with no local support network, who need help, whether it is a single parent who is due to go into hospital or couples who are struggling with debt or housing problems.

Dartington Social Research Unit has developed a screening tool app that social workers can access on their mobile telephones to establish quickly if a family fits the criteria for SFFC intervention. Whereas current intervention systems can take up to six weeks, once a referral is received by SFFC it can act on the same day.

Following referral, Safe Families volunteers, who are usually recruited through churches, take the children into their own homes overnight, for a couple of nights or up to a couple of weeks.

The arrangement is made with the complete agreement of the parents, and children return home as soon as possible, with the offer of continued support for parents from a 'family friend' or mentor.

One thousand volunteers, host families, family friends and resource friends have been recruited in the North East. Each volunteer goes through a strict recruitment process which includes application, references, DBS check, home assessment and training before their application is reviewed by a panel and approved.

Safe Families policies and procedures have been praised for their high standards by Middlesbrough’s Local Children’s Safeguarding Board (LSCB).

Keith Danby, chief executive of SFFC, said: “It’s just not sustainable from both a financial and social perspective. Local authorities have identified they need to work much earlier in the cycle. We believe Safe Families is tailor-made to make that happen and prevent the number of children going into care.

“We can mobilise an army of caring people with a natural instinct to help. Volunteers are very excited about the opportunity to contribute towards helping those who are going through challenging circumstances and to stop family breakdown in society.”

Safe Families is based on a successful model in the USA where it has helped over 15,000 families. In Chicago alone, it has been credited with helping to halve the number of children taken into care in less than ten years.