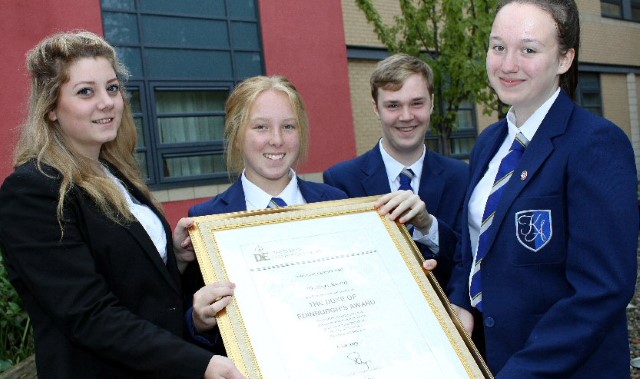 INTREPID youngsters have secured a commendation by royal appointment after completing the first stage of their Duke of Edinburgh Award.

Five students from The King’s Academy, Coulby Newham, celebrated after being presented with the coveted bronze award in a scheme which is widely regarded as the world’s leading achievement programme for young people.

They were the first students from the academy to achieve the award, which is a new initiative for The King's coordinated by facilities manager Andy Carr.

He said: “To complete the first stage of the award scheme the students needed to provide evidence of accomplishment in four areas including skill improvement and physical activity as well as working within the community and completing an expedition.

“They’ve gained so much from all of the individual experiences, from finding their independence to working as a team and helping others, all of which are invaluable skills which they can apply in everything they do in the future.”

They also completed a two day expedition visit to the North York Moors and Upper Teesdale.

“I thought that the awards programme sounded like fun and I knew that taking part would be looked on favourably by universities when I apply for courses in the future,” said Amy.

“It’s made me a lot more independent and also encouraged me to take on more responsibility around the house like looking after my brother and helping my mum with the cooking and cleaning.

“I had a great time, especially on the expedition, which I think has influenced my younger brother to take his bronze award next year.”