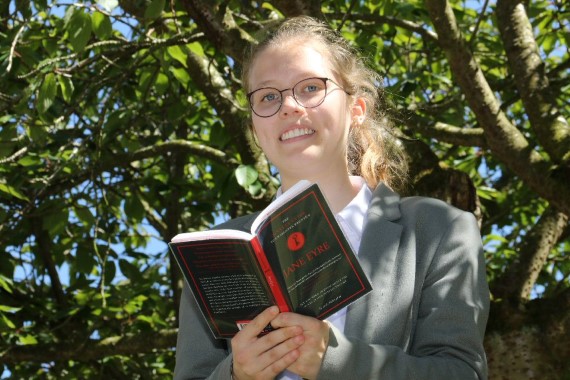 A GERMAN student has won a prestigious accolade by writing a poem in Spanish inspired by an English classic.

Karolin Rendelmann has spent the last year in the lower sixth as an international student at Barnard Castle School. To fill in time during half term she entered a competition run by Oxford University and the Stephen Spender Trust, a partnership that champions international literature.

The 17-year-old, of Wolfsburg, Lower Saxony, has just heard that her 25 line poem has been selected to be included in an anthology of successful pieces.

The competition set entrants the task of writing a poem based on an extract of Jane Eyre, by Charlotte Bronte. The work had to be written in Spanish with an English translation.

“I didn’t think I’d done well as I hadn’t heard anything in over a month so was surprised to be contacted,” she said.

“I enjoy writing but poetry is difficult as you have to fit the language to the thought rather than the other way around. I write for the student magazine Barney Biz, am in the creative writing club and have also had a short story published about a fantasy world in the clouds in a school magazine.

“The poetry competition was interesting. It was written for the rhythm of the Spanish language and sounds better than the English translation. There were also parallels to draw between the Empire of Jane Eyre’s Britain and how the Spanish conquered South America which inspired me.”

Other successes in languages saw lower sixth student Imogen Roff win a prestigious Dresden Trust Scholarship, one of only 12 people in the UK to receive the honour.

She will spend three weeks at a school based in the city learning more about German culture after submitting a CV, detailed letter as to why she was applying and a reference from the modern foreign languages department.

Year 9 student Anna Herbert was awarded the regional section of the Anthea Bell Prize for Young Translators, which is organised by a group of translation enthusiasts at Oxford University.

She translated a poem from Spanish and her work has been forwarded as an entry into the national competition, beating more than 3,200 translations from more than 260 schools.