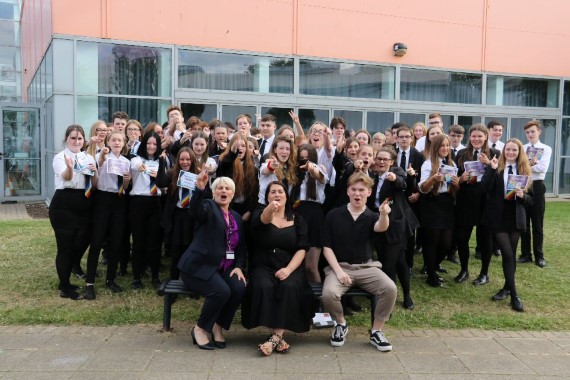 HUNDREDS of pupils took their turn in the spotlight at two special celebrations to reward them for their efforts at school.

Queen’s Young Leader and winner of the Young Apprentice Ashleigh Porter-Exley inspired children and staff at Haughton Academy, Darlington, with a talk before handing out the accolades.

Pupils from Years 7 to 10 were awarded for effort and achievement in a host of academic subjects, including languages, humanities and sciences, as well as music, art and personal development.

Principal Su Gill said: “This was such a lovely way to end what has been a very difficult period for schools and I was thrilled with how many families joined us for such a special moment.

“It was great to have people back in force for these whole-school events, the first for three years. It was also touching to see how much support pupils gave each other during the awards. They were so proud of what everyone had achieved.

“I also received many positive comments from parents about the celebrations showing how much they had enjoyed marking the achievements of our young people.”

Mrs Gill was appointed principal in April after being deputy. She said: “I am already looking forward to next term and working with the whole school community to ensure Haughton Academy remains the very best place to learn.”