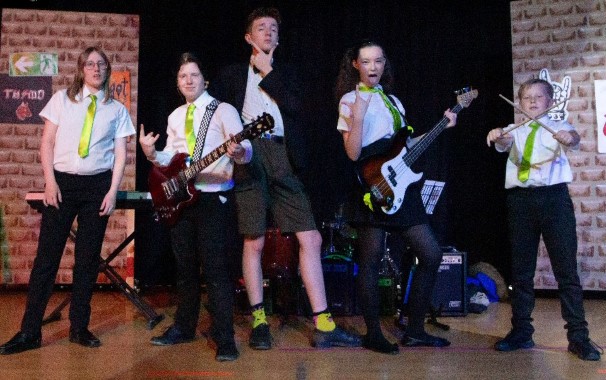 ROCK ready pupils found themselves in the band as a school staged its first musical in a decade to critical acclaim.

A cast and back stage crew totalling more than 35 put on a show to remember as Haughton Academy, Darlington, was transformed into the School of Rock.

Packed houses rocked the night away as years 7 to 11 pupils, joined by year 6s from neighbouring Springfield Academy, brought the popular movie and stage musical to life.

The first musical to be staged at Haughton for a decade, the hope is that it will become an annual event.

Pupils began rehearsing following auditions in September committing to practising at break times and after school, including Saturdays.

The music was live with lead parts playing their own instruments supported by the pit band, while staff and pupils also took care of the staging, lighting and sound.

Miss Aimson said: “Pupils were just so excited. For them this was something completely new and different and they were so dedicated.

“It went down incredibly well with the audience to the point where many came back on the second night which was virtually sold out. It also went round school just how good it was and I think everyone was surprised what they managed to pull off.

“Everyone was incredible but we thought the Springfield Academy pupils were amazing because they had a lot of lines to learn and not as long to do this. They really enjoyed the experience and it will help when they transition to Haughton in September. Year 6 will just breeze through, I’m sure.

“We had so much interest from pupils that we are already looking to see what we might perform next year.”