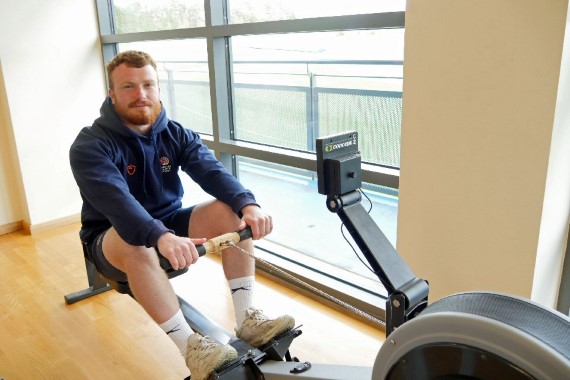 A MONTH-LONG sporting challenge has come to a successful conclusion as a rugby teacher tries to raise greater awareness of mental health issues.

Barnard Castle School sports teacher Joe Pickering spent the whole of June running, rowing and cycling the equivalent of 14.3km a day in the gym to draw attention to mental wellbeing and raise £1,440 for the charity MIND.

In 2020, the Office of National Statistics published that 5,224 people in England and Wales took their own life, equating to an average of 14.3 people a day. Approximately one in four people experience a mental health issue each year, with one in six people across the UK experiencing a common mental health problem, such as anxiety and depression.

Mr Pickering, who is a former pupil and one of Barnard Castle School’s sports graduates, said: “I am grateful for everyone’s support over the last month, which spurred me on during some really tough times in the gym and while exercising. In the end it was all worth it, though, as I have managed to raise a significant amount of money for an amazing charity.

“Mental health should not be considered a taboo, but be embraced and discussed openly. It has been particularly heartening to have had pupils and staff join in the exercises with me throughout, as well as discuss the topic itself, raising further awareness about MIND and mental health as a whole.”

Anyone still wanting to support Joe’s fundraising efforts can visit his GoFundMe page at https://gofund.me/71d0de22.