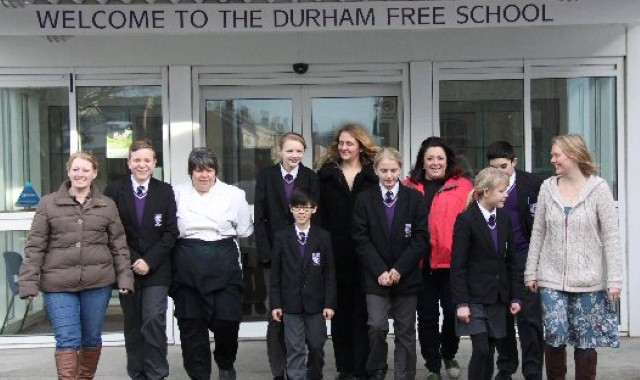 GOVERNORS and staff of a school that parents say is transforming children’s lives say they are determined to push forward and make rapid progress towards becoming an outstanding school.

Despite facing challenges, governors of The Durham Free School say new leadership, following the dismissal of the previous headteacher, is already having a positive impact on the future strategy of the school.

Parents too have reiterated their confidence in the school even after being warned that the outcome of an Ofsted inspection was unlikely to be positive.

Chairman of governors John Denning said: “Whilst many parents reading Ofsted’s report will not recognise it as their child's school and the experience they have day to day, we have to accept the overall judgement and work hard to build on the positives to continue moving forward from here.

"The report confirms that we were right to make significant changes with regard to leadership, and recognises that our inspiring acting headteacher and his deputy have a clear vision for the school and were already taking positive steps.

“By addressing the principal issues raised, we are confident there will be rapid progress and we will continue to work closely with parents to raise children's aspirations, standards of behaviour and attendance. Our assessment data shows that children have made considerable progress since joining us.”

Just prior to the inspection, deputy headteacher Julian Eisner stepped up to be acting head and inspectors recognised that he and deputy head Julie Normanton were starting to improve standards and “developing a clearer vision for the school’s future”.

Mr Eisner added: “We are a young, dynamic and rapidly growing school that’s full of energy and potential. Our students have made excellent transitions from primary to the challenges of the secondary environment. They receive the utmost care and nurturing from our highly qualified  and committed staff team.

“It’s never easy when you’re in a pioneering situation and don’t have GCSE results that are a clear, standardised measure of achievement, but Ofsted have seen enough positives for a fresh start from which we will deliver the outstanding education to which we aspire.”

Inspectors noted that all students' reading ages had improved and that funding has been used effectively to support disadvantaged students in particular, who account for nearly half the intake.

Students have the opportunity to take part in a broad and interesting range of activities that add enjoyment to the school day.

Inspectors said the school's safeguarding procedures were effective in identifying students at risk, students were "supervised closely at all times during the day" and that they moved around the school "sensibly and appropriately".

Staff receive regular training on safeguarding and the designated safeguarding lead is diligent in securing support when students face significant challenges in their lives, they added.

Parents said they would continue to back the school – and encourage other parents to visit it before making a judgment – because it was having such a positive impact on their children.

Lyn Dodd, of Spennymoor, said: "I didn't want my son to go to a big comprehensive, I wanted somewhere small and nurturing. Ofsted aside, I can only say my son is making progress. They have bent over backwards for him here and I don't believe he would have got as much support at a big school."

Craig Stobbs, of Bowburn, said: "For me, it's the individual care this school offers. When my son was in plaster for five weeks after breaking his leg, the staff really looked after him. He was helped around the school and had lessons on the ground floor.

"Schools get bad Ofsteds, and I don't think my son would do better at any other school. He is happy here, and I'm happy with the decision we've made to send him."

Mum Lesley Wilkinson, of Spennymoor, added: "My son was very introverted because of bullying in his previous school but now he's really thriving and full of confidence. He has also done marvellously academically since coming to The Durham Free School as he was way behind and has already made up a lot of lost ground. He used to dread going to school but now he's happy to go."

In an anti-bullying questionnaire in December last year, 98 per cent of the 64 parents who responded said the school managed bullying effectively. Ofsted acknowledged incidents were recorded and followed up.

Mr Denning added that governors took full responsibility for the issues under their control.

“The review by the Education Funding Agency in November highlighted specifically where we needed to improve and our resulting progress plan for governance will be fully implemented by February 10.

“On other matters, particularly those around leadership and management, day-to-day operations and teaching and learning, we had concerns as far back as the summer and, before Ofsted came, the governors took decisive action to address them.

“Now, under our new management, we are reaffirming our vision to provide children with the best opportunities and a real choice for families to the south east of Durham.”