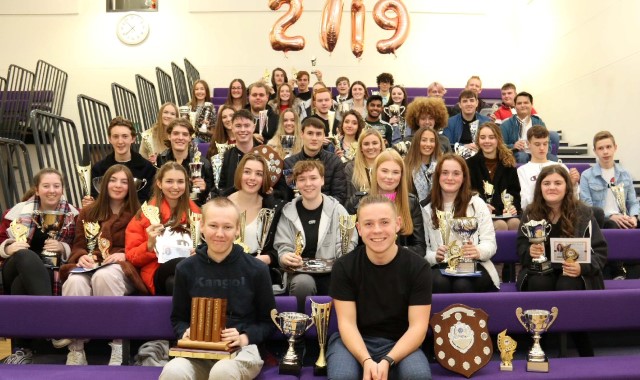 AN inspirational student has been recognised for his resilience after a two-year battle with leukaemia.

Dylan Westgarth was awarded the coveted Tom Brown Award for embodying the ethos of St Michael’s Catholic Academy in Billingham.

Two years ago the teenager was diagnosed with acute lymphatic leukaemia for which he is still undergoing chemotherapy.

Despite missing a year of school he managed to gain six GCSEs and a Btec and is now studying a public services qualification at Bede 6th Form College with the aim of training to be a police dog handler.

The Tom Brown Award, named in honour of former pupil Tom Brown, 16, who was tragically killed in a road traffic accident in April 2013, is presented every year recognising courage over adversity. Tom’s parents Jaz and Chris attended the ceremony. Jaz said: “This could not have gone to a more worthy recipient and I am sure Tom is looking after Dylan.”

Dylan, a scout leader and police cadet, added: “I was so surprised; I had no idea I was going to get this award but it feels really good.”

“I have always wanted to join the police and am due to ring the bell – marking the end of my treatment – at about the same time as I am due to complete my public services course.”

The Good Shepherd Award, recognising personal achievement, went to Brooke Godfrey, while the Archangel Award, for embodying the Academy’s vision, was presented to Sarah Keay and the most prestigious award of the evening the St Michael’s Award for going above and beyond the Academy’s core values, went to Head Boy Gareth Drysdale.

Ms Regan told staff, students, families and friends: “Young people are a powerful force to change the world. We are proud of what our young people have achieved and I hope you are too because this is a moment to be proud of.