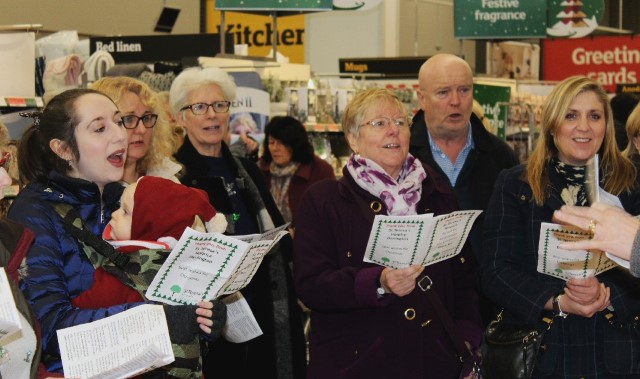 Surprised shoppers were stopped in their tracks as the 17 strong choir appeared from the aisles and broke into a rousing rendition of Jingle Bells, accompanied on acoustic guitar by hospice volunteer Peter Bradshaw and James Hughes on bass.

The choir, which will be taking to the stage at this year’s St Teresa’s Hospice Christmas Cracker Concert, at The Dolphin Centre, on December 21, continued with their 30 minute performance with Christmas classics including Santa Baby, I wish it could be Christmas Every Day and Santa Claus is Coming to Town, alongside traditional favourites Away in a Manger, O’ Holy Night and White Christmas.

Showing their appreciation for the yuletide spectacular, generous customers helped to fill hospice donation buckets with over £400, to help fund the facility on Woodland Road, which provides free care and services for the people of Darlington, South Durham and North Yorkshire affected by life-limiting illnesses.

Hospice chief executive and choir director Jane Bradshaw said: “This is the second year running that St Teresa’s Staff and Supporters Choir has startled shoppers in Sainsbury’s with their festive flash mob cheer.

“It’s always a delight to see the look of surprise on people’s faces when the music starts. There were loads of smiles and people singing along. It really was Christmas community spirit at its best.

“Once again our choir was in fine voice and everyone had a great time while raising incredibly valuable funds for the hospice.”

Shopper Michelle Taylor, of Darlington, added: “The singing was delightful and such a surprise. We could hear the choir from the other side of the shop. It was so emotional and we absolutely loved it.”