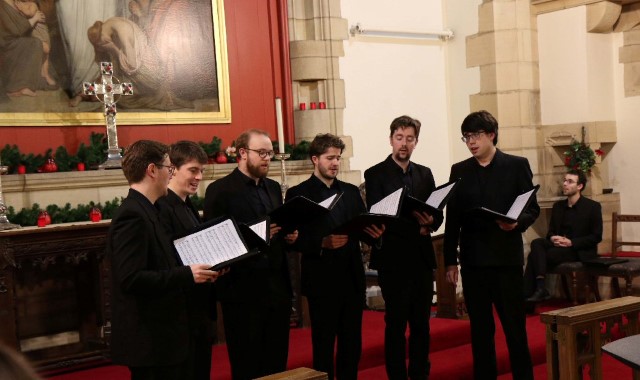 A CELEBRATED ensemble swapped Beirut for Barnard Castle in a spellbinding display of Cappella singing.

Barnard Castle School’s chapel erupted into rapturous applause and a standing ovation after a stirring performance by The Gesualdo Six.

The vocal consort should have been performing in Beirut but its director Owain Park told an audience of students, staff, parents and friends: “Because of the political situation there at the moment we were advised not to go.”

Instead they accepted an offer from Barnard Castle School’s director of music Richard Dawson to perform in chapel.

The singers staged a workshop with pupils on the afternoon before joining the school’s chapel choir in the evening, as part of a stunning 90-minute spectacular.

Mr Dawson said: “It was such a privilege to host The Gesualdo Six who are one of the best ensembles in the world. Chapel was the perfect setting for an amazing concert which was loved by everyone there.”

Year 7 choir member Zara Dobson said: “The performers were so nice, so approachable and I feel we all learnt a lot at the workshop which helped us sing better on the night and, I’m sure, in the future.”

He said: “We ended up staging a mini tour of the North of England and we have really enjoyed ourselves, particularly working with pupils.”