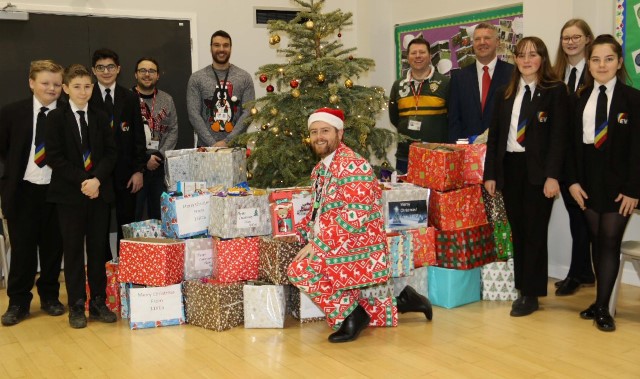 KIND-HEARTED pupils have rallied to the cause to ensure fewer people go hungry this Christmas.

With the help of their families, pupils at Haughton Academy, part of the Education Village, Darlington, collected scores of hampers for a local foodbank, while, in a separate act of kindness, they also collected toiletries for some of the borough’s most vulnerable.

Representatives from the King’s Church, which runs a foodbank on Whessoe Road, were invited into school to collect 74 hampers bulging with a host of provisions.

Foodbank assistant Andrew Coltman told pupils: “There are now more foodbanks in the country than McDonald’s and around four million children living in poverty, an issue we must as a society address.

“This week alone we have provided 77 hampers and have prepared another 300 party bags so people can attend parties over the festive period and feel they are contributing to the celebrations.”

King’s Church operations manager Mark McKnight added: “It isn’t just the unemployed who can’t afford food. We have people coming to us who are paid well but are having to cope with mounting debts. It is fantastic that pupils have been so supportive and we also need them to spread the word to anyone out there that if they need help we are there for them.”

Head girl Amelia Calvert said: “It is hard to understand that in the 21st century, in a country as rich as this one, that foodbanks are still needed. But at least pupils have responded well by collecting so much food.”

Principal Jonathan Lumb said he was immensely proud of how much pupils had collected. “This is typical of the caring nature of pupils at Haughton Academy and I am thrilled that once again they have risen to the challenge and responded so generously,” he added.

Culture for learning lead Liam Taylor, who helped the children organise the collection, said: “It is incredible to think that what we have handed over today could be gone by tomorrow. That really puts the scale of this issue in perspective.”