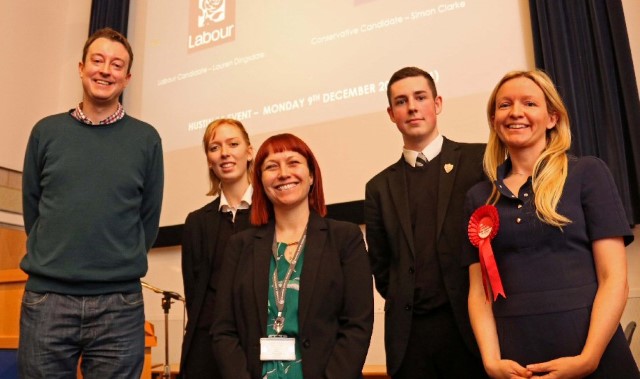 SIXTH formers have been grilling politicians on the eve of one of the most significant elections in history to find out exactly what the parties are planning for the youth of today.

Prospective parliamentary candidates Simon Clarke (Conservative) and Lauren Dingsdale (Labour) debated head to head at The King’s Academy in the only hustings to be staged in Middlesbrough South and East Cleveland.

Both candidates were given ten minutes to tell Coulby Newham sixth formers their views before the teenagers go to the polls for the very first time on Thursday.

Hosted by The King’s Academy head boy Charlie Murkin, they also fielded questions, ranging from whether there should be a meat tax for environmental reasons and how they saw the election going in the marginal constituency, to the best policy in their manifestos for young people and should the British people have the final say over Brexit.

Charlie said: “The big problem we have as young people is being disengaged and not thinking voting matters.

“I think the hustings have got students excited about the election, got them involved and helped them understand the respective policies. I don’t think it has changed my views but it has been great hearing the candidates in person.”

Head of sixth form Jenni Yuill said: “It is a real privilege to hold the only hustings in this constituency and it has certainly helped students understand the importance of them voting.

“When the referendum was held none of them were old enough to vote yet it is a decision that will affect their futures and they now have the chance to make their mark.”

Mr Clarke agreed saying: “This is the most significant election for many years and every vote matters.”

Ms Dingsdale added: “It is so important to use your vote however you decide to cast it.”