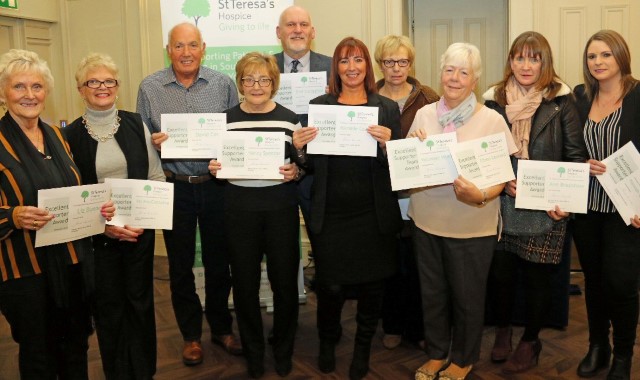 AN intrepid explorer is successfully helping one of his favourite charities climb a fund-raising mountain.

‘Seven Summit’ Steve Graham was unable to collect an accolade for his efforts at the annual awards ceremony of St Teresa’s Hospice because he was tackling Mount Vinson, a 16,000ft peak in Antarctica, the coldest and most windswept continent on Earth.

Even to reach the base camp requires a 14 hour flight and a trip on a Russian cargo plane which has to land on a natural blue ice runway.

His latest exploits come on the heels of just returning from climbing Mount Everest, the first man to reach the summit to raise money for the much-loved Darlington and District Hospice Movement, which offers care to people from the borough, South Durham and North Yorkshire.

The Everest expedition alone raised £15,000 for St Teresa’s Hospice and Prostate Cancer UK, a key factor in a healthy financial report revealed at the annual meeting.

St Teresa’s chief executive Jane Bradshaw said: “Steve is currently in a vast ice desert where the cold is extreme and storms regularly roll in. We don’t present this award very often but he certainly is the worthy winner of our Worldwide Supporter Award.”

Also helping the charity along the way this year was Reid Street Primary School who embraced the efforts of Seven Summit Steve by studying his explorations, recreating in the playground the number of steps he took to reach the top of Everest and making a papier mache mountain, raising almost £3,200 in the process.

The charity’s finance director Nicola Myers also won high praise for her part in securing extra funding from the NHS to clear the costs of the in-patient unit built three years ago.

But as the annual running costs for the hospice’s in-patient, outreach and community care now total almost £4m the fundraising would be continuing in earnest, the annual meeting heard.

Chairman of St Teresa’s Hospice Dr Harry Byrne said: “It has been a year of challenge and notable achievement set against a background of unrelenting financial pressures. Merely to stand still would be a success but we have managed to hone our services in terms of quality and quantity.”

Mrs Bradshaw spoke about the hospice’s founder: “Sadly, this year we lost Yvonne Rowe. All good causes start because someone shouts and Yvonne was the person to raise her voice when she asked the newspapers whether we should have a hospice in Darlington.

“She was our inspiration. It was a privilege to know her, to spend her last days with her and to speak at her funeral. She was a kind, intelligent, unassuming and humble lady who shouted and that is the reason we are here today.”

For a full list of all the St Teresa’s Hospice annual award winners and details of the annual review visit https://www.darlingtonhospice.org.uk.