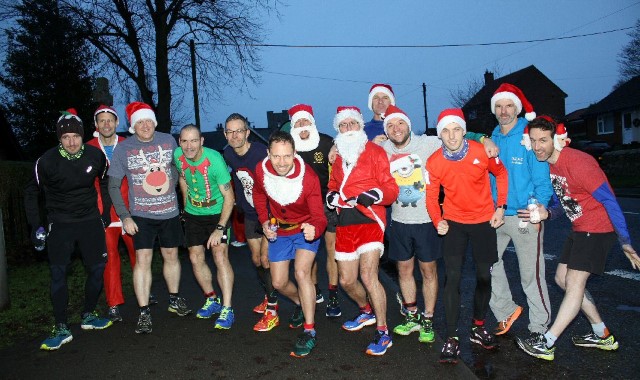 FESTIVE fundraisers in fancy dress took off at a pace to help raise money for a local hospice.

More than 220 runners from across the country gathered at Barton Village Hall, near Richmond, for the 11th annual sponsored McTaggart Trot.

Organiser Grant McTaggart, of the Darlington Triathlon Club, said: “The initial race was set up after the wife of one of our members sadly passed away.

“She received end of life care at St Teresa’s so we spoke to the hospice and asked if we could adopt them as our main charity.

“Since then we have raised in excess of £10,000, starting with just nine teams in year one to over 75 teams here today.”

The McTaggart Trot runners are divided into mixed ability teams of three for the 11mile run setting off in groups of five teams.

At the 3.5mile mark, the first runner stops and the remaining two increase the pace to the seven mile check point where the second runner drops off leaving the last team member to race to the final 11 mile mark.

“It’s not a race as such,” added Grant. “But we do have a lot of seasoned runners so some festive competitiveness is allowed.

“It’s all about raising as much money as we can for St Teresa’s, having fun and making new friends.

“When I take the cheque into the hospice each year and meet the people who work there it is so inspiring and makes all the hard work so worthwhile.”

St Teresa’s Hospice chief executive Jane Bradshaw said: “It’s wonderful to have continued support from Grant, his family and friends, who help us in such an energetic way! We love it when Grant comes in to see everyone; he’s a great ambassador for our cause as well as a fantastic fundraiser.”

Rachele Dunn, of Brompton-on-Swale, brought along her daughter Katrina, 11, and seven-year-old springer spaniel Riley, dressed as an elf, to take part in the run.

“I’d never heard of the McTaggart Trot before this year so as a keen runner I thought I’d come along and take part,” she said.

“Not many sponsored runs let dogs enter so it’s great that we can come along as a family with Riley and all run together.”

First team past the post were presented with a traditional Scottish haggis and bottle of malt whisky.