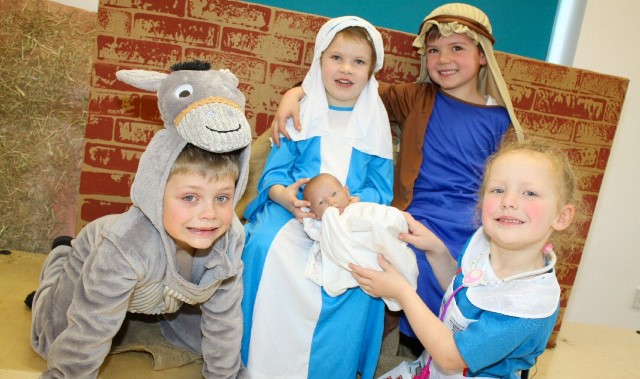 THE midwife was on call this Christmas to help nativity performers deliver a very special gift.

Students from Year 1 and 2 at Eldon Grove Academy, Hartlepool, part of The Extol Academy Trust, brought the Christmas story to life with their yuletide play ‘It’s A Baby!’

Angels, shepherds, kings, camels, cows and chickens, filled the stable as the weary innkeeper was kept up all night with dozens of visitors wanting to see the new born baby.

Assistant head teacher Sharon Stephenson, who directed the play, said: “All of our pupils have been learning about the Christian religion in RE and it’s wonderful for them to be able to bring the Christmas story to life in our nativity play.

“We’ve given the story a bit of a twist this year, with the midwives on call and a team of comedians and narrators who only give the stable a one star rating on Trip Advisor.

“However it is important to include the traditional elements of the nativity and the children have really enjoyed having their moment to perform in front of parents and carers on the stage.”

Leading roles were played by five-year-old Ivy Craggs, as a midwife, Reece Waddingham, five, as Mary, Freddie McKenna, five, as Joseph, and Samuel Bousfield, six, as the donkey.

“It’s really nice for us to be on the stage all together singing, “said Samuel. “I liked being the donkey and having everyone come to see our play.”