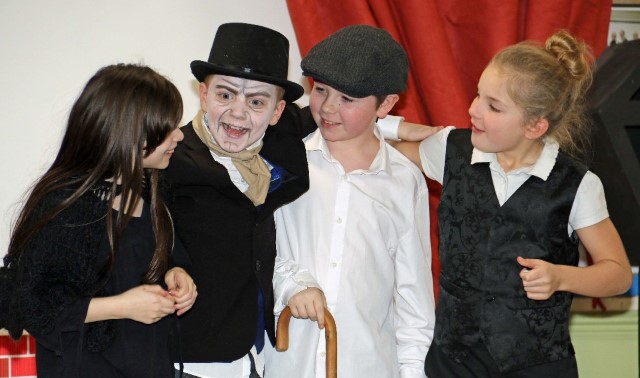 PUPILS gave a haunting, harrowing and hilarious performance of a Christmas classic, the culmination of weeks of rehearsals for their festive show.

Directed by deputy head Simon Heritage, with the help of Key Stage 2 staff, the production took the audience back in time to witness the transformation of Ebenezer Scrooge from skinflint to a man of generous spirit.

Ghosts of Christmases past, present and future helped Scrooge see the error of his ways and avoid the shackles forged in life by his accumulated sins of greed, bitterness and selfishness.

Head teacher Alison Sinclair said: “ When we announced which production we would be staging we were overwhelmed by pupils wanting to play the major parts. They brought in their own costumes and learned the words and songs and the result was outstanding.

“These are the moments children remember and carry into adulthood. Moving off timetable allows them to learn in a different manner and the production offers every pupil the chance to shine.”

Key stage 1 pupils offered their families a more traditional Christmas with a Nativity story entitled A Miracle in Town.

Mary, Joseph, three Kings and a host of angels were joined by a veritable stable of animals as ‘the greatest story ever told’ was recounted to an appreciative audience.

“They all did so well remembering their words and songs, their cues and places and everyone loved their performance,” Mrs Sinclair added.