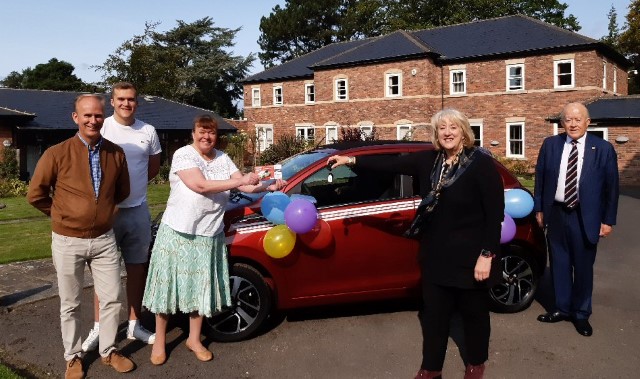 A CAR mad family has had a surprise win, adding a zippy little run around to their driveway thanks to a charity hospice draw.

But this year she received the call she never expected telling her that she had scooped the top prize of a Peugeot 108, provided by long-time supporter of St Teresa’s Hospice Sherwoods Motor Group.

“I have been buying and selling tickets for years, particularly at Cummins, where I work as a project manager,” said Helen, of Darlington.

“I first became aware of St Teresa’s through Cummins who have supported the charity for many years.

“I have been working from home because of COVID-19 so this year I actually bought our tickets online and didn’t realise the draw had been postponed from June until now. Then I got a call from the hospice saying I had won the star prize – it was an absolute shock.

“It’s a great little car and Sherwoods have been absolutely brilliant. I am also delighted to work for Cummins, a company that dedicates so much time and effort to supporting charities and local communities.”

A total of 15,349 tickets were sold and with additional donations the draw is expected to raise £16,000 at a critical time for hospice funding, which has been blighted by the pandemic.

Sponsors Sherwoods Motor Group not only sourced the trendy Peugeot 108 but also sponsored the print costs of raffle tickets and pull-up banners.

The winning tickets were drawn via a live stream on the hospice’s Facebook page by Sherwoods chairman and hospice honorary president Alasdair MacConachie, helped by hospice chief executive Jane Bradshaw.

Proceeds from the draw will help to provide vital funds for the hospice on Woodland Road, Darlington, which provides free day, in-patient and community care, as well as counselling and bereavement support, for people living with life limiting illnesses and their families in Darlington, South Durham and North Yorkshire.

Mrs Bradshaw said: “The car draw has been one of the few fundraisers this year to actually go ahead, bringing in much-needed funds for us to continue our work through this very difficult period for people.

“There has never been such a challenging time for the hospice as, like most charities, most of our fundraising activities have been cancelled. So this support from our community has been absolutely amazing.”

Mr MacConachie added: “St Teresa’s Hospice has been serving this community for more than three decades and has been incredibly resourceful in managing to keep operating.

“It needs the community’s support more than ever so it can continue to help patients and their families at the most challenging times of their lives and Sherwoods are thrilled to be able to help.”

The draw, now in its fifth year, has raised over £80,000 in total for the much-loved hospice.

Helen said she was now trying to think of ways to help the hospice further including trying to promote its charity Christmas puddings.

A further nine prizes, including an Iron Man karting session at Teesside Karting for up to ten people and annual membership at Catterick Racecourse for two people, were also drawn with all winning details available on the hospice Facebook page: www.facebook.com/stteresashospice.

St Teresa’s Hospice launched an emergency appeal when the pandemic struck. Anyone wanting to help can still use the Just Giving page: https://www.justgiving.com/campaign/HugToStTs.