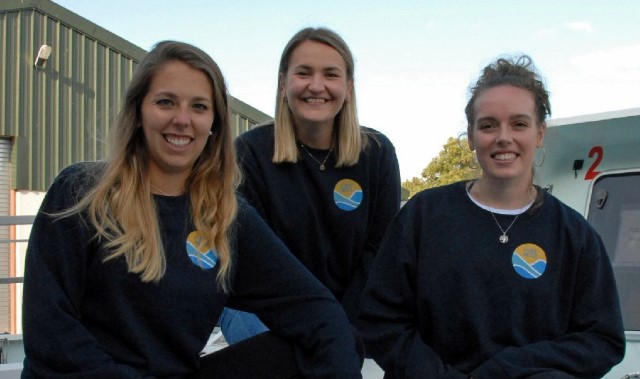 AN intrepid athlete will be calling upon the resilience she developed at school when she tackles the voyage of a life time crossing the Atlantic in a rowing boat.

The fearless trio have just completed their final training session in the North Sea before embarking on the 3,000 mile Atlantic voyage from La Gomera, in the Canary Islands, to English Harbour, Antigua, on December 12.

The culmination of two years of planning, what lies ahead is a 24/7 challenge of two-hour rowing shifts, living on freeze-dried food and using a bucket for a toilet.

Their vessel for the event will be a Rannoch R45, named Dolly Parton, a self-righting 8m long 2m wide rowing boat, with only two small cabins for protection against the waves, storms and powerful sun rays.

The world record to row across the Atlantic is 29 days, held by a men’s four crew, the average is 60 and the longest 120. The current women's trio record is 49 days which Georgie hopes to complete in 45.

“It is going to be hard physically and mentally,” said Georgie, 23, of Cotherstone. “I loved Prep School and have some great memories. We played a lot of sport and made some really good friends. It also gave me the resilience I will need on the trip and the confidence to succeed.”

After leaving school Georgie studied at Lincoln University where she took up rowing about four years ago, which was normally limited to rivers.

“I was looking for a bigger challenge and wanted to break a record,” said Georgie, who works as a freelance in marketing and design. “Some friends mentioned the challenge to me, the boat building company Rannoch put me in contact with Flo Ward and Hannah Walton and we really clicked.

“We have been training in the North Sea and practising rowing overnight. It is difficult around the UK because of the tides and all of the other boats out there. In the Atlantic we will have the Trade Winds in our favour but we are expecting massive waves.”

Headmistress of Barnard Castle Prep School Laura Turner said: “We encourage all our pupils at Prep School to aim high with all that they do, set themselves challenges, to embrace failure and come back stronger, to be proud of their achievements and how awesome they are and can be. To hear of a Preppie taking on such a challenge is wonderful and certainly inspiring to younger generations here at Barney.

“We wish Georgie and her teammates the very best of luck and we will follow their progress with keen interest as they attempt this incredible, record-breaking achievement.”

The rowers are hoping their feat will also raise funds for and awareness of two charities – Women in Sport and MIND’s Rowing Together for Healthy Minds campaign.

They have set up a Just Giving Page at https://www.justgiving.com/crowdfunding/atlanticantics.

“We wouldn’t be where we are today without sport,” said Georgie. “And within the rowing community everyone knows someone with mental health struggles. With COVID, mental health has never been so important and we think it is just the time to tackle something awesome.”

After the challenge is safely over Georgie will be thinking about the next one. “If it goes ok I can see us turning ourselves into a brand,” she said. “We’ll have done Atlantic Antics so may very well consider Arctic Antics or even something in the desert.”