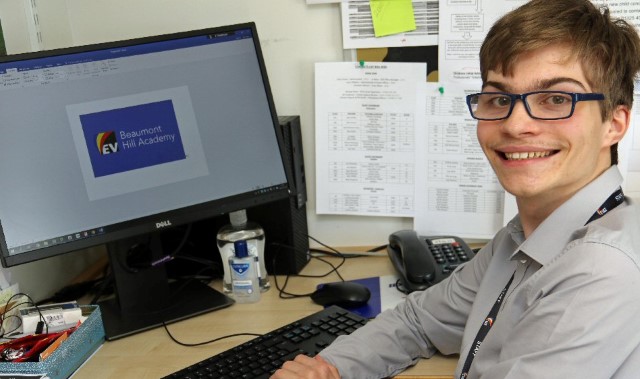 A FORMER pupil is getting down to business at his old school after securing an apprenticeship.

Philip Roberts, ex-head boy at Beaumont Hill Academy, part of the Education Village, Darlington, loved his school so much he asked whether he could stay on to do an apprenticeship in business administration.

The school agreed and linked up with Stockton Riverside College to deliver the programme which will see Philip learn in the college classroom and on the job.

“I really liked school as everyone was so supportive and it was a great place to learn,” said Philip, who is following in the footsteps of his mother in business administration.

“I was really lucky to get a place on the course and thrilled to be able to do my apprenticeship at my old school.”

Beaumont Hill Academy Principal Adrian Lynch said: “The progress Philip made from Year 10 was unbelievable. He was such a great ambassador for the school and left with a string of GCSE and Btecs, including maths, English and IT.

“He is currently handling phone calls, emails and post, as well as completing a project on face coverings for college. The way his self-confidence has grown has been amazing and we feel really proud to be able to support him into adulthood.”