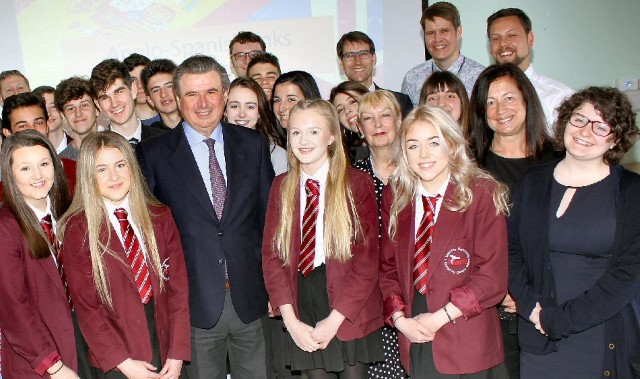 A North East school with an international reputation has cemented its position on the world map with a prestigious accolade.

The honour recognises staff and students for their work across the globe in terms of sharing expertise, providing exciting opportunities for professional and educational development and forming life-long friendships.

First awarded the privilege three years ago, the school had to demonstrate evidence of its sustained international culture.

Curriculum research and development lead Phil Robertson spent lockdown collating information on how the school’s international work across Europe, Scandinavia and South America had benefited hundreds of students and scores of teachers.

In recent years the initiative also included exposure to STEM subjects, including maths and science, rather than just traditional languages.

“For many staff and students this initiative has provided some of the best experiences of their lives,” he said.

“It was a huge task pulling all the evidence together but this is an award we certainly did not want to lose and even in the face of Brexit and COVID we are planning to continue our work long into the future.”

Staff and students have been in touch with colleagues abroad through the internet to find out the impact of the pandemic on their lives.

Before COVID the school played host to countless visits from exchange students, teachers, even the Ambassador for Spain to the UK Carlos Bastarrech and the Minister for Education for Spain in the UK Gonzalo Capellán.

Bishop Auckland and Spanish students created business language resources to not only gain future employment in both countries, but also to learn the differences between interview techniques, job adverts, and CVs in both partner countries from a business context.

St John’s students also travelled to A Courña, in Spain, where they were given an insight into the Spanish workplace with one of the world’s largest fashion retailers Inditex, which owns high street stores Zara, Triston and Pull and Bear. The school also forged links with German car maker Audi and pharmaceutical giant GSK.

Eight teachers from schools in Spain and Germany spent a week job shadowing staff at St John’s Catholic School and Sixth Form College as part of the Erasmus Plus Key Action 1 project. They observed the British educational system focusing on good practice and continuing professional development.

Alongside the European delegates’ visit to Bishop Auckland, staff from St John’s expanded their partnership job-shadowing six teachers in Hungary, while two staff attended a well-being course in Spain and two senior leaders headed to Finland to look at the education systems.

Until recently, the school hosted an annual Year 7 student exchange to Zaragoza in Spain and established links with Iquitos in Peru, where sixth form students have travelled for nearly ten years to impoverished areas of the Amazon, to help build kitchens, bakeries and work in local schools and orphanages. Also, Year 9 and 10 students visited Senlis, France, to pay their respects at the war graves and cemeteries of the WW1 Somme battlefields.

Headteacher Lisa Byron said: “We are delighted to have received this prestigious award again and it is testimony to the collaborative work and commitment between staff at St John’s and those in our partner schools.

“Students and staff have benefited greatly from the many international opportunities and activities that are available to them and we hope that we can continue this great work in the future.”