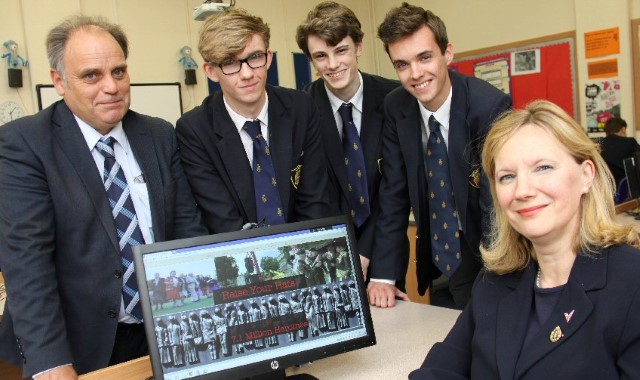 INFORMATION about the role British women played on the home front during the Second World War is being read around the globe thanks to the work of three teenage boys.

The team of IT students from Ripon Grammar School - Jacob Turner, Patrick Lindley and Matt Ford - were drafted in to help develop and build a website to publicise the Raise Your Hats campaign to promote the national Monument to the Women of World War II, in London.

The bronze statue, with 17 sets of clothing, hats and handbags, is next to the Cenotaph at the end of Downing Street, and is ten years old next month.

With the anniversary approaching, and the 70th anniversary commemorations of VE Day this year, former documentary maker and the last surviving female trustee of the Monument campaign Peri Langdale wanted to spread the word so the women's stories are not forgotten.

She explained: "Many of the 7,100,000 lives the monument represents, I'm sad to say, are leaving us so it was very important to find a way of sharing and discussing the untold stories that belong to the nation and our children.

"I am very proud that this educational project is supported by the Education Secretary Nicky Morgan MP. These women not only protected and preserved Britain during the war but they also rebuilt it afterwards; they held it all together.

"Things like equal pay, recycling, food security, childcare for working women and many other issues that we think of as modern phenomena were actually challenges that were led, and overcome, by women during the war."

With two children at Ripon Grammar School, Mrs Langdale approached IT and business teacher Bob Walker for help with the website. The boys used their Wednesday enrichment sessions and free time to plan and develop it.

Jacob, 17, of Sharow, explained: "We didn't even know about the Monument to Women before but through meeting with Mrs Langdale each week and discussing and developing the site we've learned a lot about women's role in the war."

Matt, 17, of Thirsk, said: "It was great to work on a meaningful project that people around the world are viewing and learning from."

Patrick, 17, of Ripon, who is standard bearer for HMS Heroes, added: "We all helped design the site, together with Mrs Langdale, but we also sourced images and video clips for it outside of our meetings."

A level IT students must complete and report on a major project, and Mr Walker has gained approval from the exam board that a collaborative project will count.

"They positively welcomed it, so it means this significant and official project for a 'real' client will be externally moderated and will count towards the students' final grade, after they have completed their 90-page report," said Mr Walker.

"I couldn't have done it without them," added Mrs Langdale. "It was their interest, enthusiasm and questions that drove it. It was very valuable to have that objective contribution from young people. They never let me down and I had complete confidence in them."

The website, www.monumenttowomenwhitehall.com, continue to be developed to host schools’ resources about World War II. It is already linked to the Royal British Legion schools' activity pack, Guardian Teachers' Network, HMS Heroes, and is being promoted in schools by North Yorkshire County Council.

* An exhibition - Raise Your Hats to the Women of WWII - takes place during the summer events programme at Ripon Cathedral from June 25-August 21.