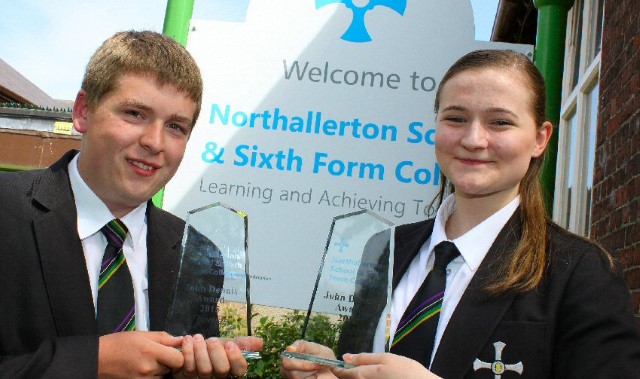 A WORLD class fighter and a student described as ‘the voice of calm’ have received the highest honours at their school’s end-of-year prize-giving ceremony.

Named after former chair of governors John Dennis, the award is presented to the Year 11 boy and girl, who by their attitude, commitment and honourable conduct, have contributed most to the character and reputation of the school.

Rebecca, 16, of Northallerton, trains with the England karate squad and will represent her country at the Wado Kai World Championships, in Japan, in August.

“It never even crossed my mind that I would be nominated for the John Dennis Award never mind win it,” she said.

“The fact that all of the tutors in school and all the students vote for the winner means so much and I feel extremely proud to be recognised.”

Thomas, 15, of Welbury, who received a rapturous round of applause on receiving his award, said: “This is a very big surprise – I can’t believe all my tutors kept it quiet from me.

“I didn’t even think I’d be in the running so I’m extremely shocked but very happy.”

Year 11 team manager Matthew Tucker added: “Tom is the voice of calm and reason within his peer group and Rebecca is always the go-to person to get anything done. They both represent the values that we want to instil in all our young people.”

Tom and Rebecca were among hundreds of Year 11students who were recognised for their academic achievements, consistent effort and contribution to school life at the annual prize-giving ceremony.

Certificates were handed out to students, nominated by their tutors for academic excellence and effort in 24 individual subjects ranging from maths and science to media and Spanish.

“This is quite an historic assembly as it is the first year group to have taken their GCSEs as a new school,” he said.

Good behaviour certificates, effort awards, attendance certificates, house awards and tutor group awards were presented by Mr Byrne, Sgt Wilson and PC Woodcock with special awards, given to pupils who were nominated by their tutors in at least three different subjects for their effort and achievement handed out by Mr Hardisty.

Assistant principal and head of key stage four Lynda Phipps, who retires this year, said: “All of our students have been on an education journey from the age of four to 16 and have had a lot of help from tutors, friends, parents and people at home to get where they are today.”