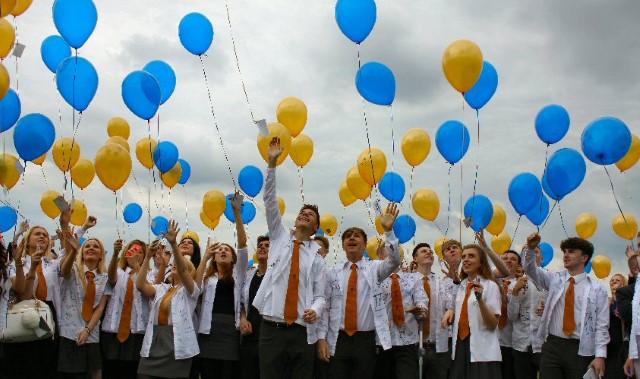 SCHOOL leavers have sent their hopes and dreams sky high after being described by their teachers as ‘a year group like no other’.

Year 11 pupils at St Michael’s Catholic Academy, Billingham, released 171 gold and blue balloons, one for each student, with cards attached with their wishes for the future to mark the end of their school life.

The balloon release followed an emotional end-of-year assembly where teaching staff paid tribute to a special group of young people.

Head of year Marc Scott said: “These students really have been a year group like no other. In the five years that they have been at St Michael’s they have gelled as a community, turning events into fundraisers for those in need and collecting over £4,000 for Zoe’s Place.

“Our footballers have won the County Cup and progressed to the later stages of the National School’s Cup, we had the largest school presence at the Diocesan Youth Festival, our students have won the Premier League national enterprise competition, one pupil won a national carers award, one went to India to help those less fortunate and this year group provided the school’s first head boy and girl for over 35 years.

“They have impressed us with their musical talent, high standards of behaviour and have supported staff and fellow pupils through sickness and bereavement all of which embodies the core values of our Catholic academy.”

The assembly, which was attended by dozens of parents, carers, friends and family, was entertained by Year 11 pianist Brandon O’Brien, rock group The Lads in the Band, Max Bover, Joe Buck, Ben Fletcher, James Gunn and Elliott Wing and Year 11 singer Chloe Francis, who made it to the final stages of BBC’s The Voice competition.

Mr Scott also made an appearance on stage as part of the group Bone Idle and the Hobos singing the U2 classic One, which he dedicated to his Year 11 students.

Form tutors also paid tribute to their students and passed on words of advice for the future.

Longest serving form tutor Miss Vicky Laking said: “I am so proud of each and every one of my students.

“You only get one school life and it is wonderful to see how they have blossomed into mature people over the years. I am so happy to have shared in that journey with them.”

Student Amber Plummer paid tribute to head of year Mr Scott on behalf of the year group before gifts were presented to form tutors and support staff.

“What a journey this has been,” said Mr Scott. “Apart from being married and having my children this has been the most fulfilling part of my life so far – this has been a fantastic year group.”

The celebration was concluded by head teacher Andrew Ramsey who urged students to ‘know who they are’ as they continued their journey in life.

“Who we are is very important and our values of respect, compassion, trust and love that we have shared, has made St Michael’s a school of which we are very proud.

“Our students here today have been described as generous, delightful, trustworthy, bold and courageous human beings. They are all of that and more and can leave St Michael’s knowing exactly who they are.”