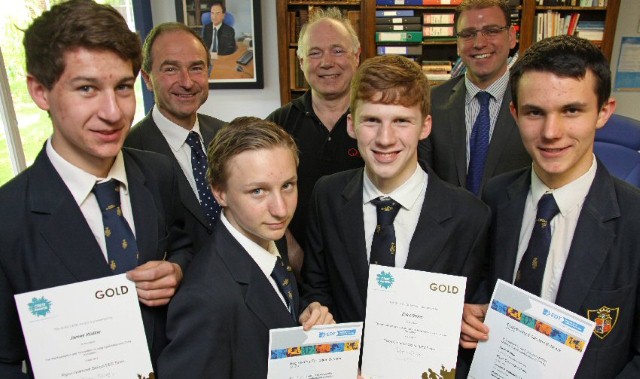 A GOLD award was the icing on the cake for a team of young engineers who earned special recognition for their success on a work placement.

The four lower sixth students from Ripon Grammar School took part in the Engineering Education Scheme, which gives young people the chance to work for an employer on a real project.

The team - David Stone, Zach Mudge, team leader James Walker and Zak O'Brien - worked at Quasar Automation, of Mickley, on a project to design an auto cake icer and decorator.

They not only passed the scheme, which is run by the Engineering Development Trust, but also received a gold crest award in recognition of their performance.

Mike Barker, head of engineering at Ripon Grammar School, said: "It's a fantastic achievement for the students and great for the school to be involved in this scheme, which gives young people a realistic opportunity to work as employees on a real project.

"The team put in a great deal of hard work, working on it in their free periods and getting the bus over to Mickley during the sixth form's Wednesday afternoon enrichment programme. They also completed a three-day residential at Sheffield Hallam University."

Zach Mudge, 16, of Ripon, said: "I'm doing A level product design and am set on doing an engineering degree so it was really good to be able to work on a long term project like this."

Bob Hinchcliffe, managing director of Quasar Automation, said the boys' concept would form the basis of a new product.

He added: "I'm a great believer in bringing on anybody who is interested in engineering, and it was great to have these four fresh minds to work with. There is potentially such a shortage of skilled people that we have to do what we can to encourage young people to come into the industry.

"Engineering is fantastic. There is such a huge spectrum of jobs and skills that it's the ideal profession for anyone with an inquisitive mind. I've been doing it for 45 years and I learn something every day."

Paying tribute to Mr Hinchcliffe and Quasar Automation, Mr Barker added: "Our students wouldn't have had this chance if it wasn't for Bob, who is a great supporter of the school. He has offered many of our students work experience, one former student is working at Quasar now while doing a foundation degree and another is due to join after his A levels.

"We hope the project will inspire other businesses to get involved in the Engineering Education Scheme."