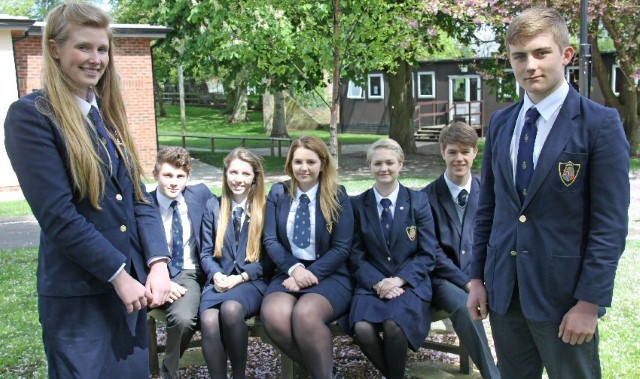 SEVEN role models have been selected to lead and represent the student body at their school.

Ripon Grammar School has appointed its head boy and head girl and their five deputies who will take office next month and serve for 12 months prior to leaving school next summer.

The students had to apply for the posts, be interviewed by headmaster, Martin Pearman and head of sixth form, Terry Fell, and seek views from staff and their peer group. The final decision was taken by the school Senior Leadership Team.

Lauren is studying A levels in biology, chemistry, mathematics and English literature with a plan to read medicine at university.

The 17-year-old, of Ripon, who recently played Cosette in the school production of Les Miserables, said: "One of our main roles is to organise Charity Week in October and we sit on the School Council, liaising between students and teachers."

Nicholas, 16, of Ripon, who is studying English, Spanish, mathematics and chemistry, plays hockey for North Yorkshire, is a swimming coach and plays the piano, added: "We also have a number of public speaking roles throughout the year and host visitors in school."

Sophie, 17, of Boroughbridge, is hoping to further explore opportunities for a career in politics or law when she does work experience at the United Nations in Geneva in October.

Hannah, 17, of Bedale, joined Ripon Grammar School this year having spent the last three years living in the United Arab Emirates. With plans to be a primary school teacher, she is studying English literature, drama and theatre studies, psychology and geography.

Musical Melody plays the flute and trumpet. The 17-year-old from Boroughbridge is taking A levels in biology, chemistry, mathematics and further mathematics and hopes to study veterinary medicine at university.

Headmaster, Martin Pearman, said: "As always, we had a large number of high calibre students to choose from for these important roles.

“The positions are wide-ranging, requiring leadership, diplomacy and tact. I'm confident our new head boy, head girl and their deputies will fulfil their roles confidently and effectively.”