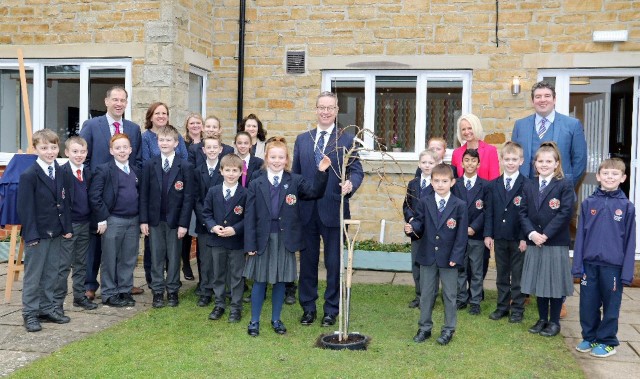 PUPILS helped a dignitary plant a tree in a symbolic gesture marking the revitalisation of boarding at a leading school.

In a genuine coincidence, Barnard Castle School became the 135th world-wide to join the Boarding Orchard as the North school celebrated its 135th anniversary.

The restructure sees 21 boarding pupils from Years 3-8 housed under one roof to enjoy high quality residential facilities which, during term time, they call home. Demand is growing at such a rate that later this year work will start on an extension to provide another eight much-sought after places.

“It’s a far cry from my experience of boarding,” said Mr Fletcher who attended Rugby School. “We had no heating, 20 to a dorm and slept on ex-prison beds.

“There are 480 boarding schools in the UK with 75,000 boarders. I visit these schools to see how things are going and I am very impressed with everything I have seen at Barney. It is the best I have seen for a long time.”

He told the whole of Barnard Castle Preparatory School, which turned out for the launch ceremony, that Boarding Orchard had been launched three years ago to bring together the boarding community. Trees had been planted across the UK, in Malaysia, Turkey, Switzerland and America.

“As the oldest pupils in junior boarding, Year 7 and 8 boarders will be able to assume leadership roles and, indeed, be role models for younger boarders,” he explained. “By the time they reach Year 9, they will be better equipped for moving up to senior boarding.

“Boarding has been at the heart of our school since it opened in 1883 and it is vital we continue to provide a warm, caring and nurturing environment in which our children can flourish.”

The school will continue to provide flexi and occasional boarding, popular options for parents who have to work away for short periods or with other overnight commitments.