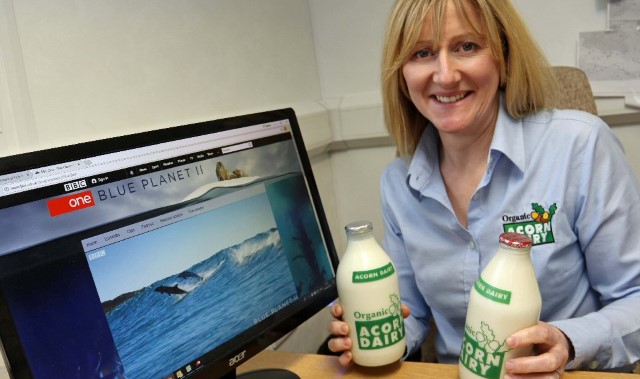 AN organic dairy has received a message in a bottle after customers were inspired by the plight of the world’s oceans.

Acorn Dairy has been inundated with requests for milk in bottles instead of plastic cartons following the screening of the BBC’s Blue Planet II, which highlighted the dangers of man-made detritus.

In one month alone Acorn Dairy, which serves the North-East and North Yorkshire, was contacted by 250 existing customer households to switch from its recyclable poly cartons to glass bottles.

At roughly 106g of plastic per average weekly carton milk order, this equates to 1.378 tonnes per annum of plastic waste saved by Acorn customers alone.

Acorn Dairy director Caroline Bell said: “I think we were all horrified by the pictures of whales surrounded by plastic waste and the impact this is having on our world. The response from our customers has been heart-warming showing the large impact that can be made by households taking their own individual action.

“We handle almost one million glass bottles a year. An average Acorn Dairy glass pint bottle is used 19 times before being recycled and we have to buy in around 17,000 annually to replenish out stocks.

“In our local delivery area we supply the glass bottles at 59p to the doorstep and we have seen a four-fold increase across a month in new customers with the same mission of receiving their milk in glass bottles. These are local people converting from supermarket milk to ours which is excellent.”

Mrs Bell said they had also received inquiries from catering establishments and hotels about considering switching to glass bottles and she was looking forward to them following the eco-trend.

Acorn, which became organic more than a decade ago, enjoys an enviable reputation for conservation, compassion and commercial enterprise.

It is a past winner of the Tye Trophy for the Tyne Tees region from the Yorkshire Agricultural Society, an accolade that recognises the efforts it makes to operate a successful business while conserving the environment and boosting animal welfare.

It is also a holder of the organic ‘Oscar’ issued by the Soil Association and the Good Dairy Award by Compassion in World Farming, the international welfare campaign group.

Brother and sister Caroline Bell and Graham Tweddle operate their farm at Archdeacon Newton, Darlington, an organic island in a sea of intensively farmed land that predominates in the North-East.

The organic farming movement, which rejects artificial feeds, insecticides and the over-use of antibiotics in favour of natural processes, is concentrated in the South West of the country.

But Acorn Dairy decided to convert to organic more than a decade ago and has built up a loyal following of 4,000 doorstep customers, schools, cafes, restaurants and supermarkets including Waitrose and Morrisons, right across the North-East and North Yorkshire.

Research has shown organic milk to be much richer in antioxidants, healthy fatty acids and Omega 3 as a result of the herd feeding on grass and clover.

Acorn’s herd of shorthorns offers a natural rate of milk production which is less than in an intensive farming system, allowing the cows to live longer, happier and healthier lives.

Compassion for animals extends to the farm as a whole and Acorn Dairy has created a thriving wetland for flora and fauna, birds and small mammals.

Bird boxes have a 90 per cent occupancy rate and the 16 acre reversion meadow is home to countless species of local and visiting birds, while miles of hedgerows provide safe passage and homes for myriad creatures.