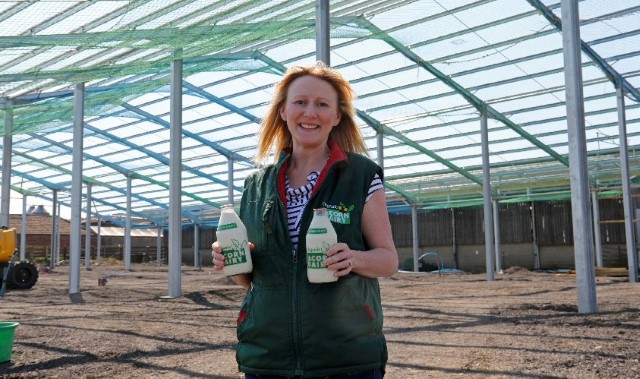 A LUXURIOUS cowshed with automatic hairbrushes, foot-spa and memory foam mattresses for its herd is being constructed as a dairy expands to meet demand for its organic milk.

Extra staff, including herdsmen, milkmen and processing operatives, will also be needed at Acorn Dairy, one of the region’s most successful organic businesses as it approaches its second decade of operations.

Up to 200 extra dairy shorthorn crosses will be housed in the new facility providing an additional 1.3 million litres of milk a year for doorstep and commercial customers across the region, from Tyne and Wear to Yorkshire.

More than 3,200 doorstep customers are supplied, as well as Co-operative Stores across Yorkshire, the Freeman Hospital, Newcastle, the region’s schools and a host of farm shops and caterers, by the multi-award winning dairy.

Eighteen years after becoming organic, the latest expansion will see a herd almost 500-strong be reared at the main farm in Archdeacon Newton, near Darlington.

An additional 400 acres has been secured next door for grazing and silage, which is being converted to organic over the next two years, free from chemical feeds and pesticides. An RSPB nest box programme, that is already flourishing at Acorn Dairy, will be extended to the new land.

Going organic has had myriad benefits for the environment and wildlife and the farm is now home to countless flora and fauna, including 86 species of bird, some of which are on the endangered species list, such as the rare Red Start.

Director Caroline Bell said: “Our main aim is to farm in a way that is responsible and benefits animal welfare and the environment.

“Happy animals are healthy and more productive and our customers love the fact that they can come and see the cows who provide their milk.”

The luxury cowshed is being constructed on the site of a medieval rig and furrow paddock after being surveyed and protected by archaeologists and Historic England.

It will feature footbaths, automatic hairbrushes which groom the cows on contact and memory foam mattresses in stalls that will be 30 per cent larger than traditionally used.

Caroline said: “Because they are happy they live longer, healthier lives and produce milk for longer. We have one cow that is 14, twice the average age of dairy cows that are farmed intensively.”

Her brother and fellow director Graham Tweddle added: “Cows are heavy animals, about 700kg, with relatively small feet. Research has shown that if they can take the weight off their feet, by lying on the memory foam mattresses, the bloodflow increases to their udders and they produce more milk.

“The new shed is also closer to the milking parlour so they don’t have to walk as far and the footbath will help keep their hooves in top condition. The cowshed is all about boosting welfare and removing any problems before they start.”

Expansion also includes plans for a third silage clamp and a young stock shed for 100 animals.

The plant, powered by an environmentally-friendly wind turbine, has the capacity to process and bottle the extra milk, with Acorn Dairy continuing to take supplies from Newcastle University’s organic farm.

Caroline said: “It is also great to be able to offer more employment opportunities at a time when the region has seen a large number of job losses.”