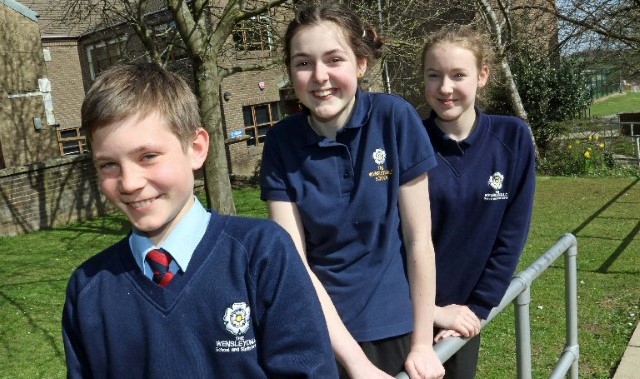 STUDENTS will be rifling through the reference books as they prepare to head-off to Eton for the debate of their lives.

Aspiring vegetarians Sam Maunder, Rosalind Monaghan used their knowledge of the practice to good effect to clinch a place in the final of the prestigious PixL ‘Up for Debate’ competition.

With team-mate Imogen Hayden, the students from The Wensleydale School & Sixth Form College, Leyburn, will tackle some of the best young debating minds in the country on July 6, in Jafar Hall, the spectacular new purpose-built debating chamber at Eton College.

Before then they will receive intense training from the UK’s top debating coaches at a masterclass in London, where they will learn to deepen their analysis, sharpen their argumentative attacks and maximise their persuasive impact on the audience.

The team will also see a West End Show and dine at The Kitchin Restaurant, a Michelin Star eatery run by top chef Tom Kitchin.

The trio won through to the national final at the regional heats, held at Sunderland University.

Imogen, 13, of Spennithorne, Sam, 13, of West Grafton and Rosalind, 14, of Leyburn, won their round one match arguing against violent video games.

Round three was an impromptu debate with just 15 minutes to prepare on vegetarianism – a topic they are passionate about. In the final round they just lost the debate opposing the removal of coursework from GCSEs.

But they were put through to the final for their strong individual performances and consistent victories as one of the best eight teams nationally.

“It was a bit scary at first but really good fun too,” said trumpeter Sam, who hopes to work in music in the film industry one day.

Rosalind, who hopes to work in set design and props, added: “I am quite opinionated and love learning new things so I really enjoyed the whole experience and am looking forward to London and Eton.”

Imogen, who wants to work in musical theatre, said: “When we didn’t win we thought it was over and when they rang to let us know we were in the final it was amazing.”

Teacher Charles Barnett, who runs the debating club, said he was thrilled with the team’s success.

“They all performed incredibly well offering clear and concise argument that was well delivered and very persuasive,” he said.

“The masterclass and the final at Eton College will be incredible experiences that the team members richly deserve.”