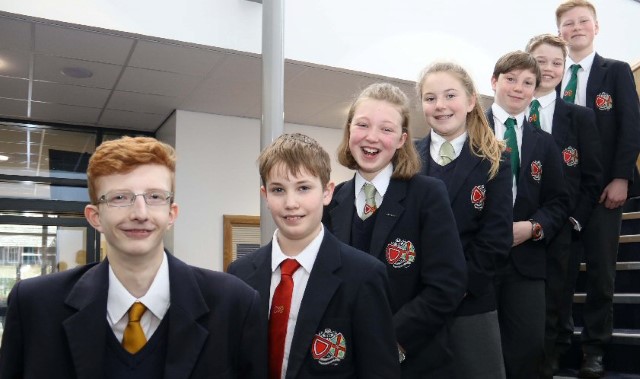 ENTREPRENEURIAL students have been inspired by the plight of a classmate who is fighting to overcome genetic health issues that have involved major surgery.

Barnard Castle School boy Mark Nicholson was born with Marfan Syndrome, a condition that left him with a badly twisted spine and severely restricted chest cavity affecting his heart and breathing.

The teenager recently underwent surgery at Great Ormond Street Hospital in London in which two titanium bars and 27 screws were inserted to straighten his spine, a move that saw him grow 10cm in height, while his chest was completely reconstructed.

Mark is now part of a team of budding entrepreneurs topping the tables in a prestigious design competition in which they have developed a new way of showering aimed at the whole family throughout their lives, particularly problems facing the elderly and people with disabilities.

The Year 8 students have teamed up with shower company Roman in the Future Business Magnates contest, now in its 11th year and run by Business Durham, the economic development company for County Durham.

Teams are awarded points for a variety of challenges during the competition and the results are published in a league table with Barnard Castle School currently in second place.

In the latest task, Mark, Kieran Bleasby, Evie Brenkley, Emelia Rowlandson, Samuel Wilson, Matthew Osborne, Robert Harris and Joseph Johnston were asked to design a household appliance that could be made in County Durham and came up with the idea of a seated showering system.

They have produced a prototype with three variations, the first of which can be inserted into a standard shower cubicle, a more sophisticated whole shower pod system and a deluxe that also features wi-fi and music speakers.

Mark said: “My condition did get us all thinking of designing something that could be useful to people with disabilities and those who haven’t, which our seat is. Roman has been great and provides us with some excellent advice and resources to develop the prototype.”

Mark’s mum, teacher Lucy Nicholson, said: “The students are great, really smart and a wonderful support to Mark after his surgery. He was very poorly and when he came back to school his friends just gave him a great big cuddle which helped him no end.

“I think what Mark has been through certainly influenced the team in coming up with an idea to help people in the home. The competition is tough and has been an amazing experience for them giving them real a taste of what business is about.”

Evie said: “The competition is very challenging but extremely good fun and we are very happy with our design.”

Judges award points for the students’ ability to work as a team and turn an idea into a business, with a maximum of 1,000 marks available. An awards dinner will be staged later this year for the teams with the highest scores.

Business development director at Business Durham Sarah Slaven said: “We are delighted to hear it has sparked such an inspiring entry from Barnard Castle School pupils based around real life challenges.

“The aim is to inspire the next generation of entrepreneurs by engaging directly with business leaders who have a wealth of experience in starting and growing their own companies and managing all the challenges that brings.”