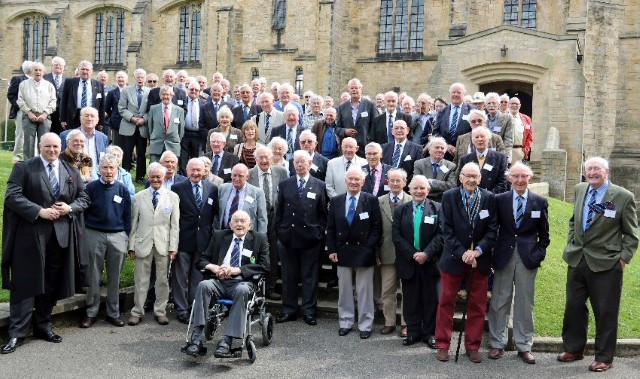 OLD boys travelled the length of the country for a reunion with classmates many returning to their school for the first time in more than 70 years.

Around 90 Old Barnardians descended on Barnard Castle School for a day-long celebration involving a tour of its latest facilities, a chapel service, spectating at a cricket match between students and the MCC, lunch and a long-overdue catch-up.

Memories came flooding back for the old boys, who left Barnard Castle School in the 1940s and 50s and are now in their 80s and 90s.

Organised by school archivist and Old Barnardians Club secretary Dot Jones, former students travelled from as far away as Pembrokeshire, Scotland and London for the reunion.

“I have wanted to hold a reunion for years and our new sixth form centre provided the perfect setting,” she said.

Former pupils are kept informed of developments at school but for many it was the first time in decades they were able to see first-hand its latest facilities, such as the brand new sixth form centre, preparatory school science block and senior school sports facilities.

The recently opened sixth from centre was built in an exercise yard which many Old Barnardians recalled being the scene of countless football and cricket matches and, during the winter, a skating rink.

“When Dot suggested the 1940s and 50s leavers’ reunion I thought it was a great idea and we expected around 15 guests. So we were delighted when 90 managed to join us.

“Going through our archives we found the housemaster’s notes, which reported one student’s troublesome behaviour including wearing slippers in chapel and playing cricket during prep. Two years later he left an accomplished and splendid fellow, which very much sums up what we are still doing today.”

Rev Moore said: “What a joy to see you all, particularly as so many have travelled such long distances. As we gather to remember the past we also look forward to the future.”

For Brian Flintoff, 88, of Thirsk, the day became a time to remember happy school days with his daughter Valerie, who was shown her father’s misdemeanours in the house book.

Inattentive and talkative behaviour gave way to excellent reports from 1942 onwards as his passion for squash, cricket, long jump and cross country came through.

“We used to go off and play squash but if we were stopped we said we were working for the war effort,” he recalled.

“The head was the best player and the intrepid explorer Bentley Beetham second, followed by another student, then me. One day it looked like I was going to beat the head so he made his excuses and stopped the match.”