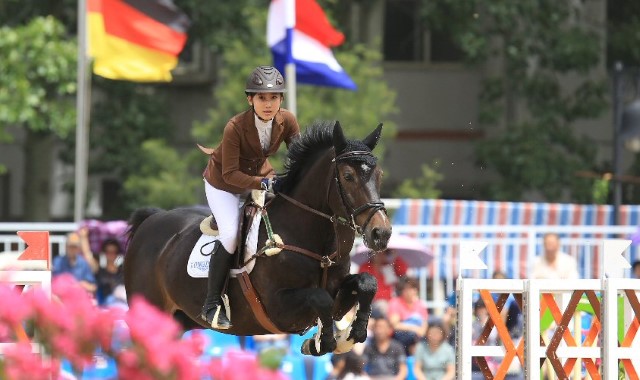 A STUDENT who boards at a County Durham school is aiming to be the first internationally known Olympic show-jumper from mainland China.

TWICE a week Alice Yunyun Wang hangs up her school suit and puts away her books to step into her car at Barnard Castle School for the hour-and-a-half drive to Bradford. Here she meets up with Joey and Pedro, her partners in a plan to take her to Olympic glory as mainland China's first female show-jumper to perform on a world stage.

The regular trips to West Yorkshire are, however, nothing compared with a recent competition she entered in Spain. On that occasion Alice flew from the North East every Thursday, returning to school on Sunday night every week - for six weeks.

It's the kind of commitment the 18-year-old knows she must demonstrate if she is to make it to the top flight in her sport. As a rider from Beijing where international showjumping is still in its infancy, she has recognised for some time, and been ready to make, the necessary sacrifices including leaving her home two years ago to come to England.

As a boarder in the sixth form at Barnard Castle School, she is able to manage her A levels in religious studies, PE and psychology alongside training and competing with the best young riders in the world.

"The sport is developing really fast in China but it's probably 40 years behind," she explains.

"I knew that if I really wanted to get to the top I had to go to Europe to train, but I also needed to study at the same time."

Sadly, the connection that brought Alice to the North has since been tinged by sadness.

Whilst working in Shanghai, her father, who rides as a hobby, got to know Margot Tiffany, the pioneering former trainer of the Chinese national eventing team.

"We knew she was the best and I wanted to train with her. She lived at Catterick, so I came to look at Barnard Castle School and really liked it. I get to have my study time and personal time and I love my house mistress and all the girls I live with in the boarding house."

Sadly, Margot, a former chairman of the British Horse Society, died suddenly a year ago. "She was a very kind lady and it was a big shock to me and my family," says Alice.

As well as helping her to improve her riding, Margot took Alice to Scotland to buy nine-year-old chestnut Joey; Pedro came from Sweden.

Alice and her horses are now trained by Richard Barton, who is based near Bradford. She competed at Hickstead under his watchful eye last autumn, in Wales for five days and in Spain earlier this year, where she was placed third and sixth with Pedro who, at 15, is her more experienced horse.

Alice started riding when she was 11, just before she became a pupil at the Beijing branch of Harrow International School.

"There was a riding club opposite our house and my dad took me for fun. I didn't really enjoy it that much at first because it was really cold, but once I got my own horse I really fell in love with it,” Alice explains.

"Gradually I started to compete for the club. I rode every day after school and went to shows at weekends. Once I knew I was really committed to the sport I got two more horses from Belgium."

By the time she left China, Alice was a member of the national young riders team. She won the Fédération Equestre Internationale Challenge Show in Beijing in 2013 and was third in the U21s Young Riders National Championship. She has even competed in the iconic ‘bird's nest’ Olympic stadium in Beijing.

Once in the UK, she won the Blue Chip Qualifier indoor show at Aintree last year.

With plans to go to university in Germany - famous for producing top show-jumpers - to study sociology, Alice has her sights on representing China in the 2020 Olympics in Japan.

China produced its first equestrian Olympian, Alex Hua Tian, only six years ago, for its home Games in Beijing and now its only international eventer has followed his success by qualifying for the Rio Olympics this summer.

Based in Cheshire, Alex was born in London to an English mother and Chinese father. “So if I make it I would be the first from mainland China, which would make me very proud," says Alice.

"Europe is a long way for Chinese riders to come and if you are relatively good you can win more back home, which I think is why not many come here.

“But if you really want to challenge yourself and compete with the best you have to train and compete in Europe. For example, in the World Cup qualifier in China, no-one had a clear round and there were nine riders in the jump-off. That would never happen here.

"The standard set by the competitors, not so much the horses, is really high. Chinese show-jumping is developing fast and I’m sure it will catch up with Europe eventually, but I hope I'm getting a head-start.

"I'm definitely improving by being here and competing and training at a higher level. I learn more every time I compete, and I also spend more time studying here too than I did back home, which makes my parents happy."