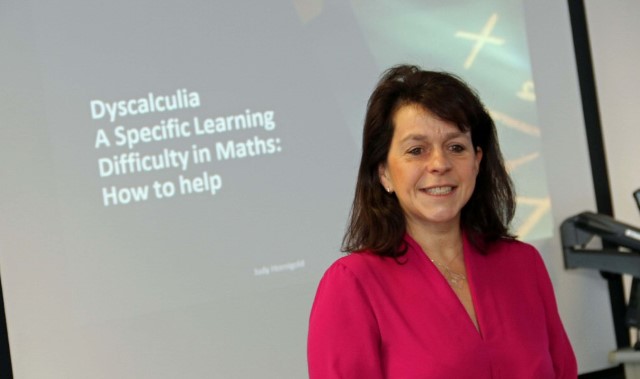 INTERNATIONAL experts in maths difficulties have been helping teachers get to grips with the issues some children face with numbers.

Richmond School and Sixth Form College’s Your Educational Support and Training department (YES@ Richmond School) played host to a regional workshop to help primary and secondary colleagues address the obstacles to learning dyscalculic children have to deal with.

Dyscalculia is a similar condition to dyslexia but impacts on people’s ability to process numbers.

The workshop was staged by celebrated figures in the field Judy Hornigold and mum Penny Topsom, who has studied the issue after battling dyslexia herself.

As a follow up, the school also staged a workshop for parents of children who struggle with their numbers.

Judy is an independent education consultant specialising in dyslexia and dyscalculia. She is also a trainer for Maths No Problem, training teachers in Singapore Maths.

Her previous role was as a senior teacher for Dyslexia Action where she gained invaluable experience in teaching dyslexic children and adults.

A primary trained teacher, she has written a guide book for parents of children with dyslexia, two books of ready-made lessons for learners with dyscalculia, the dyscalculia pocketbook and the SEN publication Making Maths Visual and Tactile.

She told teachers: “A lot of the problems in secondary school can be traced back to what children didn’t understand in primary.

“It stems from pupils not having number sense or an understanding of the concept of numbers. It impedes academic achievement and people’s daily lives as it affects their understanding of time and money, for instance. It requires from teachers a lot of patients and repetition because students will lack the intuitive grasp of numbers.”

Penny told teachers how she was inspired by her own difficulties with dyslexia. She came up with Multiplication Rules, a teaching aid for schools that aims to be a simple, visual and fun way to learn multiplication and division.

She said: “From my own experience, I can understand why many children struggle with numbers, particularly with multiplication and division, and why so many close down their 'maths brain'.

“I was the invisible child at school, the quiet one labelled 'stupid and lazy'. It wasn't until I was 16-years-old, having struggled through school, that I was finally diagnosed with dyslexia.”

After failing her maths CSE, she went to art college to study clothing design only to discover there was no escaping maths as she had to convert metric and imperial systems, take measurements and make a variety of calculations.

“Twenty years later, I now have three children who are also dyslexic but I've always tried to maintain a positive attitude towards maths for their benefit,” she said.

“Multiplication Rules! materialised when my middle son, Harvey, asked me why they are called times tables when they look like a list? In an effort to explain, I drew a grid and numbered the squares.”

Teacher in charge of Outreach Provision for Cognition and Learning at Richmond School, Kath Lawson said: “The sessions were invaluable in helping us truly grasp an understanding of the issues many children face around numbers and how that can impact on their lives in school and as adults.”