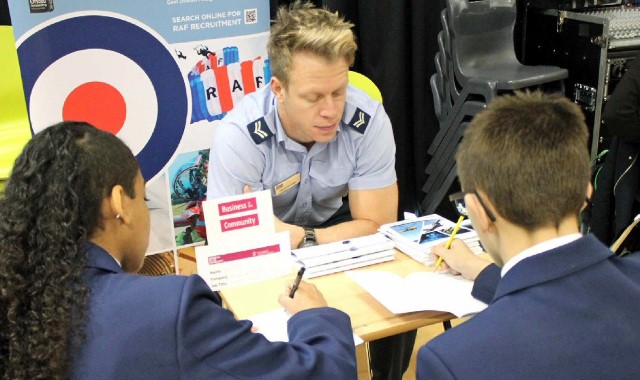 Companies including high street giant Debenhams and the NHS offered students advice on interview techniques, preparing for employment and getting the right qualifications.

Assistant headteacher  Ali McIvor-Cross said:  “In pairs our students spent five minutes with as many businesses representatives as they could learning about routes into work, different job roles and the various employment sectors available to them.

“The networking event was also a great way to meet our educational Gatsby benchmarks which help to evaluate career provision within schools by providing students with the best possible careers education, information, advice and guidance for the future.

“We even received an e-mail from one of the employers present on the day complimenting Year 10 student Jack Le-Marinel on his confidence, presentation and thoughtful line of questioning which was very pleasing to hear.”

Jack, 15, of South Shields, hopes to follow in his uncle’s footsteps by joining the British Army Royal Engineers after leaving school.

“I was very pleased to receive such good feedback from the Debenhams representative,” said Jack.

“It was a really good event and gave me the confidence to speak to lots of different types of employers and ask questions about the kind of jobs that are available and the best route to apply for them.

“There were also representatives from the Army there which gave me the chance to get lots of helpful information for when I leave school.”