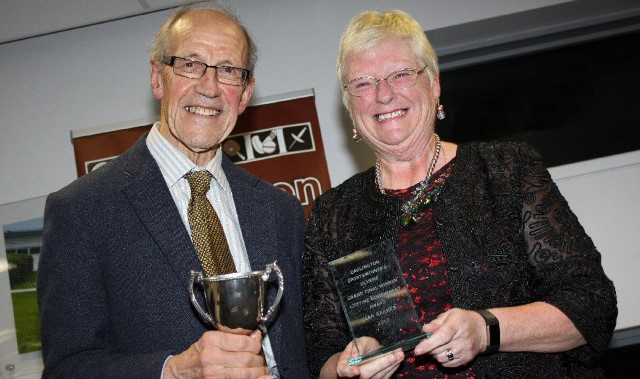 A STALWART of grassroots sport has been honoured with a lifetime achievement award.

Ian Barnes, 83, was recognised for his commitment and passion to sport at the Darlington Sports Winners Grand Final ceremony at Darlington College.

Event director of the Darlington Park Run, Mr Barnes has been a member of Darlington Harriers for more than 60 years. During that time he has acted as secretary, treasurer, vice chairman, chairman and president.

Mr Barnes said he was "deeply honoured" to have received the award from former Mayor Councillor Lee Vasey.

A capacity audience of civic dignitaries, friends and family were invited to attend the annual ceremony hosted by Darlington College.

He said: “I must acknowledge the hard work and commitment of the committee, who really enjoyed going through all the nominations, and the many people who have helped to make the awards scheme a success over the past 42 years.”

A special posthumous trophy was presented to Nicola Maxwell in recognition of the legacy left by her son Kieran.

The 18-year-old, of Heighington, lost his left leg after being diagnosed with Ewing Sarcoma, a rare form of bone cancer in 2010.

A keen sprinter, Kieran won a gold medal at the Brazil Paralympic School Games in 2015 and became a national champion in gymnastics and was also selected to carry the Olympic torch through Bishop Auckland before the London 2012 games.

The Kieran Maxwell Legacy was created to help raise funds to support the research into Ewing Sarcoma and childhood cancers. With support from friends and family Kieran organised numerous fundraisers before sadly losing his fight with cancer in June 2017.