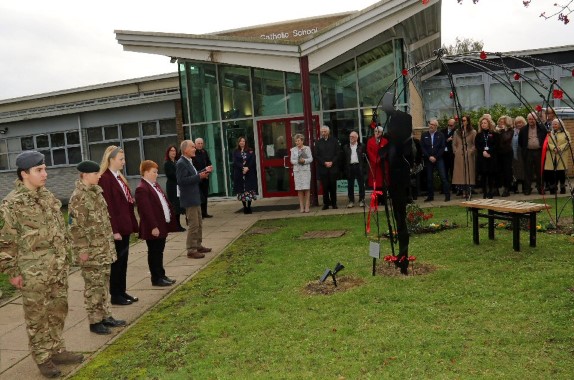 A POIGNANT tribute has been made to a much-loved school arts co-ordinator who died after a sudden illness and her son who was killed in action in Afghanistan.

A sculpture featuring a ‘Tommy’ statue of a soldier under a protective arch has been installed at the entrance of St John’s Catholic School and Sixth Form College in Bishop Auckland.

The artwork commemorates the life of the arts co-ordinator Jaquie Holloway, who passed away in 2019 after a short illness, and her son Richard, a former student, a captain in the Royal Engineers who was killed by the Taliban while serving in Afghanistan six years earlier.

The artwork, created by the school’s DT technician Ian Maddison, was unveiled at a special ceremony attended by friends, colleagues, students, the Lord Lieutenant of County Durham Sue Snowdon, and family including husband and father Neil Holloway.

Mr Holloway told guests: “I have been trying to find one word that best described Jaquie which has been difficult. Perhaps open, kind, generous, encouraging, determined? But I think the best word was mentor as she was always wanting to help other people.

“The sculpture is beautiful. The Tommy statue, with an arch representing a mother protecting her child, the two together making you think of Jaquie and Richard. Two lives well-lived.”

Headteacher Lisa Byron said: “Jaquie’s light shone brightly throughout St John’s and we wanted to celebrate her life and her legacy by creating a sculpture that represented what she meant to us: a strong, caring and compassionate individual, who brought joy to staff and students alike, but also a loving, supportive wife and mother who cherished her family dearly.

“The family’s world was rocked by the death of their beloved son, Richard, who was killed in active service in Afghanistan in December 2013. Our sculpture is a tribute to Jaquie, the loving mother protecting her son; the shelter and sanctuary for the soldier in times of conflict.

“As our arts co-ordinator, Jaquie worked tirelessly to provide our young people and staff with creative activities and opportunities to let their talents shine.  Her drive, commitment and endless ability to make the impossible, possible, have resulted in generations of students and staff participating in amazing events, productions and projects, that live long in our memories.”

She said the results of Jaquie’s vision and the culmination of her hard work and meticulous planning were evident throughout the learning community – from the Chapel’s Stations of the Cross, symbolic glass Saints and Remembrance postcards in main reception, to the mosaic tiles, unique peace globe and intricate, creative banners that adorn St John’s.

“Jaquie’s legacy lives on in all of us, in each and every student and staff member who has had the privilege to know and work with her,” Mrs Byron said. “Jaquie touched our hearts, inspired our minds and enriched our lives and for that, we are forever grateful.”

Priest Dennis Tindall blessed the sculpture and said: “Jaquie’s inventive and infectious drive brought wonders. Impossible wasn’t in her vocabulary, bringing the best out of people was. Her love of life and wonderful smile was an inspiration.

“Jacquie’s face spoke of joy and it lifted our spirits, generated commitment and success even in unlikely individuals. We rightly position this enduring feature at our main entrance as it stands as a reminder never to quit.”